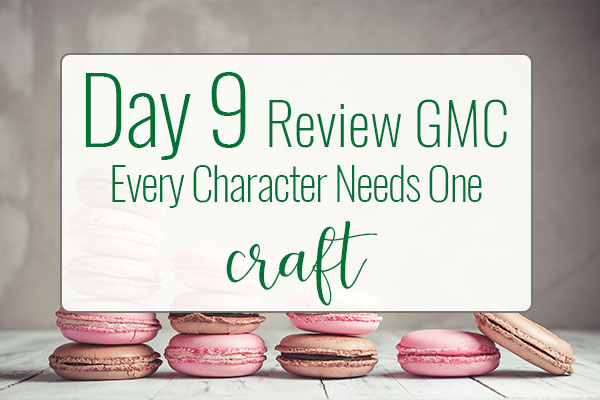 Today is all about gearing up on Character Reference Books to help you start creating an interesting cast of characters for your novel.

Hi everyone, and welcome to day nine, where we are going to review the concept of GMC. Now you may have read Dwight Swain’s book, The Techniques of the Seeling Writer, which I think is a good precursor, however Deb Dixon’s book is much more concise and to the point, so that’s the only book that I’m going to recommend, and it’s pretty straight forward, if we were to boil it down, goal is the what, motivation is the why, and conflict is the why not.

The best way to understand this is simply to go to an example of a bad GMC, and then we’ll talk about ways to make it better. So let’s say that our main character is Katie, and Katie really wants to have some ice cream, so that’s her goal, that’s her what. He motivation is she has a craving for it. Her conflict is that Katie is 15 and she has no money, and she has no car, so she can’t get out to get some ice cream somewhere.

This is a bad GMC because of two things. One, it’s easily solved, she could simply ask her parents for money, she could borrow some from a friend, she could I think today you can just order it to your house with an app, and also, it’s not dire, right. So it’s simply a want, it’s not really a need, like she’s not going to die, right, if she doesn’t have ice cream.

We’re going to assume that she’s been eating every day, and this isn’t you know, after 30 days of fasting that she wants ice cream. So, this is a bad GMC, but let’s talk about ways that we can make it better. So, one, we could make it more desperate. So, you know, maybe she’s going to die.

Let’s make her a more likable character, instead of her wanting the ice cream, let’s say she wants it for her little sister, and her little sister is diabetic, and her little sister just took an overdose of insulin because she’s not sure what she’s doing and you know, maybe Katie feels bad because she wasn’t watching her like she was supposed to, and it’s not easily solved because they’ve just run away from home, and they’ve left a very abusive relationship, and they can’t reach out to any friends or family, because they don’t have any, because they lived such a sheltered life, and they don’t want anyone to know where they are.

She can’t go to the hospital, because then for sure they’ll be caught and returned back to their parents, which is an abusive relationship. So now she’s really stuck, right. And even more important, it’s not for her, she’s doing it for altruistic reasons, so now we’ve made our character a hero, or set her up to be a hero, because she wants to get ice cream for somebody else to help save them.

It’s better because her sister is diabetic and she could go into a coma or possibly die if she doesn’t get ice cream. The other thing is we’ve also added a what they call a ticking time bomb to this situation, because she only has a small window of time before something negatively happens to her medically wise for her sister.

We have a situation that is do or die, and we have a ticking time bomb, because it has to be done within a certain amount of time. Now this obviously isn’t a GMC that’s going to sustain an entire novel, however, this is … These are two techniques you can use to make your GMC better.

The reason that we care so much about GMC is because we want likable characters, and if your readers don’t care about or can root for or get behind your characters, then they probably aren’t going to keep reading your book. Now the same is true for your villains in your story, or the bad boy, or whoever it is, your main character is … All of your main characters are the ones you need to give GMC’s for, and in theory they should all sort of conflict with another.

One person getting their goal really negatively affects somebody else from obtaining their goal. So, this is how all of your characters stay connected. Another thing too is, I don’t know if you’ve noticed, sometimes in movies, the bad guy is the person that you end up rooting for, right?

Especially in love triangles. They’ll say, are you on team one or team two, whatever the boys names are right? And so sometimes you’re on the team for the bad guy because I would argue that the author or the writer has done such an excellent job of giving that character a great GMC that you can get behind it, and you can root for it. Also, it probably helps if the bad boy is usually extremely good looking and has a perfect body.

But, aside from that, that’s usually not enough to sustain a character that you’re going to root for, they have to also have a really good GMC. So, your homework for today is to get Deb Dixon’s GMC, or review it if you already own a copy, and we will be back here tomorrow to talk about external goals versus internal, which we’ll do the day after that. Alright, bye.