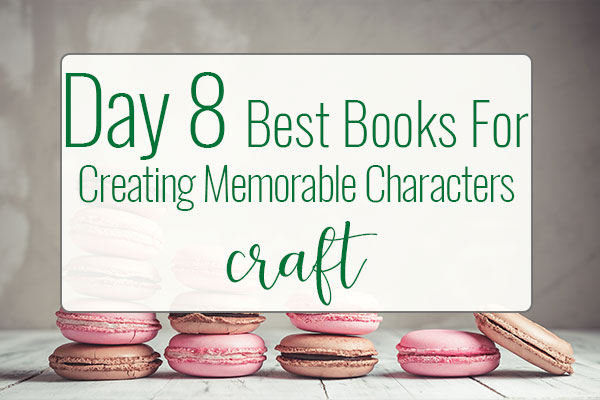 Today is all about gearing up on Character Reference Books to help you start creating an interesting cast of characters for your novel.

Hi everyone. I’m Lisa and welcome to Preptober day eight where we are going to cast our characters. To start out, we are first going to make sure we have some really good books that help guide us in how we want to shape and describe our characters to our readers. Now, I know this goes against popular belief, but do not get a character trait book. There’s some really long workbooks out there on character traits and they’re, first of all you don’t have time. That’s going to take you the entire month and you only need maybe one deep wound from the past. You don’t need a bunch. This isn’t a lifelong biography of your character. You just need some key events that are going to shape them and their personality.

For example, when they ask about demographics, you just need some basic demographics. You don’t need to know everything. It is not a medical report. These are my favorite recommendations that really get in to the psychology of the character and why they do the things that they do which aren’t necessarily based on the neighborhood they grew up with or how many siblings they had. Let me just start out with the writer’s guide to character traits. This si probably the most, I don’t want to say generic, but this is the best book I found that just goes through a lot of different … I almost want to say mental disorders. It talks about schizophrenia. It talks about I think serial killers. This is a good one. It’s done an excellent job of profiling all of these, kind of like an FBI profile.

That’s a good book. The second one for your villain or maybe if you just want to show in a romance a boy behaving badly, bad boys, is Bullies, Bastards, and Bitches. This is a long read. I think you can kind of skip to the section that you want and read up a little bit more on that. The third book is The Woman In The Story. The reason I said even though this talks about women, I think this is a much better story because it goes a little bit more in depth in to women and different stages in life and how they react. That’s a really great book to get as well. The two other ones I’m going to recommend are Linda Goodman’s Sun Signs. Now, you might have heard other writers suggest to use this book. Now, I would not use it how they are suggesting.

Remember when we talked about demographics? If you are going to pick an arbitrary date for someone’s birthday and let’s say they’re a Pisces and you’re going to look up here and this is going to then shape the character for you. That’s not what you want to do. You want to skim through these and look at the different characteristics of the different signs and then pick your character based on that. For example, I can’t even think of one, but a Pisces … I think it’s Pisces or Leo is someone who loves to dream. If you have someone who is maybe a billionaire tycoon as the star of your novel, then maybe you want to make him a Pisces and then look at some of the other characters that get wrapped up in that. That’s a better way to use this book.

The last one isn’t a book at all. This is, I don’t know if you’ve ever watched The Mindy Project, it’s her own show, but she used to be on The Office, she’s a writer in Hollywood. She’s actually really funny, but she has this card game. It’s called Questions I Ask When I Want To Talk About Myself. First of all, they’re just funny. Second of all, they’re more thought provoking questions versus questions just about demographics or where did you grow up or how did you skin your knee or something like that. This is a really great card to pull out any time you’re trying to think of maybe an interesting story to tell about your character. Something that’s going to help make them a little bit more unique. Those are my top recommendations for characters. We’re going to go in this week, I think you saw there’s a lot of days where we’re going to talk about GMC and we’ll get more in to characters this week and naming them and everything else.

I hope that was helpful. Go out, get some of those books, and I will see you back here tomorrow to talk about GMC. Bye.