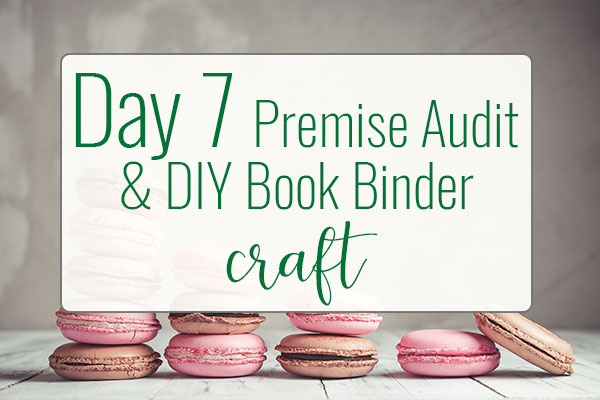 Today is a 2-for-1 deal: 1 – We’ll review the steps to perform a premise audit for originality & marketability, per the PREPtober Calendar 2 – We’ll add in an extra BONUS step and Create Your PREPtober Book Binder together

And welcome to day seven of Preptober. Today we are actually going to do two things. The first thing is the item that is on the calendar, which is we are going to test for the marketability and originality of your premise. And second, we are going to use all of these great tools behind me, and we are going to talk about putting together your Preptober Binder.

First up, let’s test the marketability of your premise. Now, the good news is, you’ve pretty much done all of the work. I just want you to go back through and make sure, again, as long as you have a high concept idea, you’re in really good shape. And that means that you have checked off all of the seven dos and don’ts from Michael Hague that we gave out the other day, and you are set to go in this category.

The second thing is testing for originality. And quite honestly, you’re never really going to know if your idea is an original or not, because I know we get so many different ideas from so many different places. And it’s so easy to accidentally … I don’t want to say copy … but use an idea that’s maybe already out there. What I would suggest, and, again, there’s no hard and fast rule, but, again, the best thing for you to do is look at the top best sellers within your category.

For example, if you write romance, let’s narrow it down and let’s say you write romance about love in small towns. So you would go onto amazon, you’d look at that category, look at the 25 best sellers of this year, and of all time. And if you just skim through those and your story doesn’t fall into any of those, you’re probably in pretty good shape. Same thing with, I would look on IMDB for your movies. Remember we talked about IMDB as being a source for where to get one-liners for your premise. So, same thing. And I think you’re going to be in great shape after that. And who knows, maybe you’ll pick up some extra ideas.

All right. Let’s get on to part two, which is the fun part, which is putting together our Preptober binders. So remember I put this in the day two Preptober survival kit. I had suggested what to put into your binder. And the first thing and the only thing we’ve done so far is to put our Preptober calendar in there.

You’ll see inside here I have some tabs, and these are the eight tab dividers I suggested that you purchase. Now, the great thing about these tab dividers, is they have a front and a back, so you can add in any pages. You could add in the pages of some of the downloads that I’ve been giving you. And, also, this is what the packet looks like, in case you don’t remember.

A second thing that I really think you should purchase are, these are little tab dividers, just for individual pages. So, for example, in the second tab is characters. But obviously your book is not just one character writing a long monologue. There are other characters he or she is interacting with. So each of them could get their own tab.

I forgot to add this in, so I’ll add it in now, it’s the self-adhesive tabs. And I really like these because you can simply … I wouldn’t try to get fancy and type it out. Just do it really quick. You can just write on it. Take it off. It’s just a sticker. Like this. And then you can just tape it onto a piece of paper, let’s say in this notebook I wanted to … I don’t want to dog mark anything, right? So I just want to add a tab divider over here. So I’m just going to line it up here on the edge, if you can see that. Close it off. And now I have a tab for my notebook. And so I can easily refer to that page to look at the character profile for Beatrice or Jason or Mark or whoever my character’s named after.

If you’re wondering what are these tabs that we’re going to be putting in here, I will tell you. The first one is your premise, and that is your one-pager. And trust me, it is going to be so useful to refer back to that very easily anytime you are trying to go through and work through your plots, your pinch points, so you can see where you’re at in the story.

he second tab is characters. So we’ll talk a lot about that this week. The third tab is location. So we’re going to do a lot printing out from Pinterest on where our characters are located within different scenes. And I think that’s going to help you to really visualize for yourself where they are, what they’re doing, what they’re seeing, smelling, what everything is like. Just to make your descriptions a little bit richer for your scenes.

The fourth thing, is we are going to write the first 10 pages. The fifth thing is going to be the complete opposite. We’re going to write the last 10 pages. So it’s kind of a sandwich in between our book. And the whole point of reading a book is to see a character transformation. And this will be a quick test for you during Preptober to make sure you have a good character transformation and a progression for your character to see where they’ve gone from A to Z.

The seventh section is comp. So, comparable. So when you think about real estate, if you’ve ever purchased a house, or if you’ve ever bought a car, you’re always looking to see what people are charging that are in comparable houses or comparable cars, or markets or anything. So the same thing with your book. You’re going to have a list of a ton of comparable titles that are in the same area as you. And remember, we just talked about looking for originality, so you’ve just done all the work for that. This is a great place for you to make notes and say, “You know, I’m writing a mystery, and I really love how Agatha Christie opens up with the murder,” or something like that. And so you can make notes on what you like, and you can refer back to that, and that’ll help jog your memory for some ideas.

The last section is the scene outline. And that’s the last day of this month. Some people love scene outlines, some don’t. I love scene outlines, especially because it helps me to follow the progression. And logically I can tell where they’re located. And if I’ve spent too much time in one city or someone’s living room, then I can jump around and make it a little more interesting by spending time somewhere else. So, it gives me a nice inventory of all the locations and characters and things going on in my book.

I know that was a lot. Last thing is, these tabs right here, if you have an Avery printer, it is so easy to line it up. You have to download the template and everything else. So I’m going to make it even easier for you. I’m just going to give you the template that you need to create this. It’s going to be a PDF. All you have to do is push print. It will be done for you. You do have to manually feed this into your printer, though, or put it into the pages when you print it. And then all you have to do … It has perforations here. You can perforate them out. And then slide them right here into these tabs inside your notebook.

I hope that was helpful, and I’ll see you guys back tomorrow, where we will start casting all of the characters in our book.