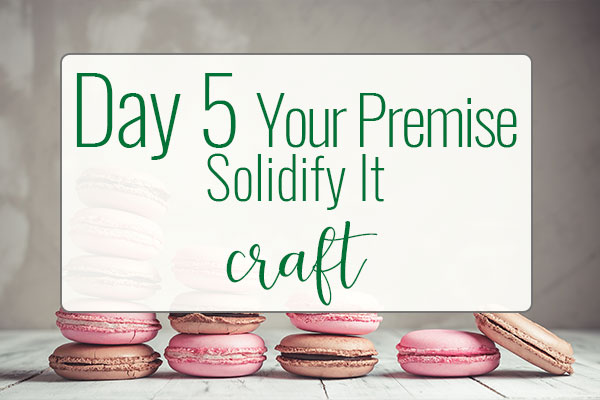 Today we’re Michael Hauge’s 7 Rules for Do’s & Don’ts when it comes to High Concept. There’s also a full 35-minute lecture by the man himself on the same topic. Which I’ve condensed into less than 5 minutes in this video.

Hi everyone and welcome to day five, where we are going to solidify your premise. In day three of PREPtober, we talked about what high concept is and I suggested that you read Lori Wilde’s book. Day four, I gave you some great suggestions on where to find inspiration of other examples of log lines, and today, we’re going to go through the Michael Hague audit of how you can define high concept the seven dos, and how you don’t define it with the seven don’ts.

This is boiled down into less than five minutes of a 35 minute lecture that he gave, so you could watch the entire thing, which has much more explanation than I’m going to give you, but I’m going to give you the quick and dirty right now, right here. The first one for the do’s is it has to be an impossible, not an everyday obstacle that seems so crazy and insurmountable that people are drawn to read it, because they want to know how you get out of it, right? Is this a Houdini act? Is this something that only Sherlock Holmes can solve? That’s what they are looking for.

The second thing, and I’m totally going to cheat and look at notes, is that it has to be over a short time span, so think of Speed with Sandra Bullock and Keanu Reeves where there’s a bus and it’s about to explode in 90 minutes, or whatever it was. Or think about Die Hard, which took place overnight. The third thing is that it must not be an ensemble cast, so it has to be one hero or heroine that you’re rooting for through the whole thing.

The fourth thing is, it has to have a visible goal that doesn’t start until the 25%, and that’s because screenplay writers or screenwriters always talk in terms of percentages. Certain things must occur in the storyline in the 10%, the 25%, the 50%, whatever. If you had chosen his system for your outlining method, which is a good choice, then that is what they talk about inside there. Prior to the 25%, your hero has different goals, or they’re going in a different direction, or they’re living their everyday life, and it’s only at the 25% mark in which point the actual goal of the whole story that drives him through to end shows itself.

Number six, it’s easy to convey, simple to describe, we already talked about that. It should be one sentence or less. Seven, it’s a genre. Particularly, it’s a comedy kind of like Liar, Liar. It is an action move like Die Hard. It is a suspense or thriller. Now, two other exceptions to that are horror and sci-fi, but only if they have an action/suspense component along with them, so think of Minority Report.

Let’s talk about the seven don’ts. The first thing is it cannot be element dependent, and this is more for Hollywood, like it can’t have a great director and that’s why people want to see it, but for books, it can’t be because so and so author wrote it, or it can’t be dependent because Random House produced it or a particular, exciting imprint they have made it. The idea should just stand on its own, that’s what this is about.

It can’t be a sequel. That’s number two. Three, it cannot be a drama and four, it can’t be historical, so the fifth one is it also cannot be biographical, so it can’t follow someone from birth to death. Also, long time fans, it can’t be something by like Eat, Love, Pray. I don’t know if I’m saying that in the right … Eat, Pray, Love. It can’t be that. It can’t be a tragedy because those are sad and depressing, and that’s not something people are going to get excited about for high concept.

Seven, it can’t be difficult to convey so same thing again, if it takes you a ton of sentences or a long time to explain it, then that is not high concept. What should you do now? First, you should just pick a genre and then second, you should either pick the heroine that you want to … Or hero that you want to star in your book and define obstacles that would be natural … Like something insurmountable for that particular character, or you should start with the goal and then pick a hero to fit into that.

Hope that gave you a good idea on whether or not you have a really solid premise, and again, I’m obviously assuming you’re writing high concept because that is the best book to write, in my opinion, especially if you’re a debut author, but if you’re not, you can still take some of the elements from this and apply it to your story. I will see you back here tomorrow when we talk about writing back cover drafts. Alright, bye.