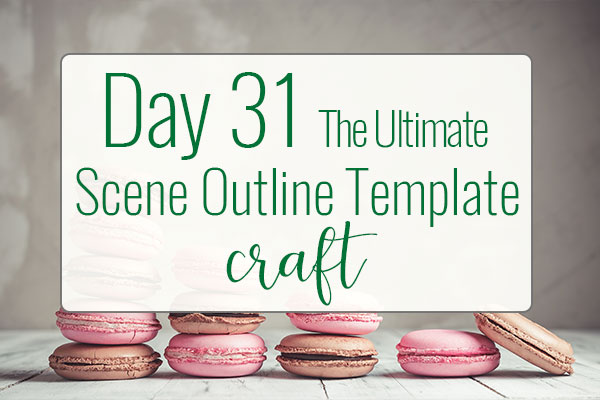 Today we’re going to go through the BONUS Template you can use to create your entire book scene outline – how to construct it, what platform to edit it in and how to use it during NaNoWriMo.

Below is the Tutorial on how to edit the Scene Outline Template.

Hi, everyone, and welcome to day 31, also known as our last day together, but if you sign up for NaNo Bootcamp, we can spend a whole nother set of 30 days together. Now, in your scene outline, what you need to do is, first, you need to decide what format you’re going to use. I like using Microsoft Excel, and that is very much unlike me. I usually like putting everything down on paper, but there is so much information that I want to capture for each scene. Microsoft Excel is easier for me, and I can copy and paste an entire row and move it around. That’s what you should think about when you think about your scene. It should be fluid.

Remember in the beginning when we talked about, on day two, your survival kit and I had recommended that you get a whole wall of a dry erase board? You can put up your scenes there, as well. It’s going to be a lot of text, though, so you might want to get some of those big sticky notes that I also suggested that you buy, and you can move those around, as well. Just remember your scene is probably not going to stick. We’re trying to outline things as much as possible, but once you write things and things come to you and you read a scene and it just doesn’t read right … In your mind, this was going to be the greatest plot device ever, to put a bomb inside a car, but when you went to go write it, it didn’t seem so plausible. Now, you need to do some backtracking. That is perfectly okay. Just know that you will need to move things around. It is always best, I can’t emphasize this enough, to make sure you update your outline every single day. I know that sounds crazy, but when you’re writing, you’re thinking …

Right now, you’re thinking about your plot. You’re thinking of your story. You remember everything. But I promise, in a few days, you’re going to forget. When you need to look back over your notes really quickly, you might not have time, once we get to day 20, to read 20,000 or 40,000 or 50,000 words to remind yourself where you’re at. It’s so much easier to just check your scene outline, which you’ve been updating this whole time.

Let’s go back. So we have a spreadsheet. It has those four columns. I have a goal, a motivation, an emotional conflict, and a disaster, but I also add in a couple things. Just like a movie script, I add in who is in the scene, where the scene is located, and what time of day the scene occurs. I get my who, what, when, where, and then the why, you could add a little note for yourself. I leave a section on why I even had this scene. I always ask myself first. I have a yes/no column. I know that sounds silly, but every single scene, I ask does this get the character closer to their goal, or is it a nothing scene? If it’s a nothing scene, you can probably just throw it away. Your readers do not have time for that, just like they do not have time to watch your character brush his teeth and do his laundry and run some errands. We never see that in TV or the movies, because it’s just boring, unless it serves a purpose.

All right, so now let’s go back to our scene outline. Now, the best part is you already have eight of your scenes written, right? We’ve already plotted out our inciting incident; our plot point one, two, three; our pinch point one and two; our black moment; and our resolution happily ever after. So now we have eight things already plotted. Now, total, you’re probably going to plot out about, I would say, 36 to 40 scenes. I know that sounds like a lot. Don’t freak out. The reason you have so many scenes is because, typically, a novel is 55,000 to 80,000 words, possibly even more if you’re writing a fantasy or a historical.

Now, what you want to do, and this is the hardest math that you will ever have to do, but I always think in word counts. Each scene typically is about, I’m going to say, 1,500 to 2,500 words, right? Based on that, you can divide that number by the total number of words that you were aiming for in your novel. If you are writing a novel that you would like to submit to a publishing house or an agent, I would go after 80,000 words. If you are writing a novella and you’re already published, then you can go for 40,000. I suspect if you are watching this and you are participating in NaNo or even want to try to make it through 50,000 words next month, you are writing something more substantial than that. 55,000, I think, Cathy Yardley, I’m borrowing this from her, suggested that is a good number for category romance. Now, I’m not going to go into what category romance is, but it has to do with the publishing lines. Just know that that is a good length. If you have 55,000 words, then you are writing about 36 scenes. So go ahead and pre-populate your scene outline with those eight plot points that we’ve already done, and then go in and fill up the spaces, the gaps in between.

How do you logically get to the first part, which is your inciting incident? We’ve already written our opening first chapter, so that should already be done, and you can type the notes into your scene outline. Then, how do you get from there to the inciting incident? How do you get from the inciting incident up to act one? All of these things together will help you. Just think about the logistics. Logistically how is your character getting from one spot to the other? If you have him going from Paris to Tokyo, then you’re going to have to make up for that time lapse, and you’re going to at least have the when done.

We talked about this before. Genre fiction is in a very small, tight time span. I think it’s like … What’s that TV show? 24. Right? Jack Bauer. He did a lot in just 60 minutes. There were a ton of scenes in there. Don’t say that you need a ton of time to write your book, because that is simply not true. I think 24 proved that nobody needs a ton of time to make a lot of action happen. Now, granted, there were multiple POVs, and it wasn’t just Jack, following him for 24 hours, but it was following him for, I would argue, probably 80% of the time.

I hope that was helpful. As soon as you get the scene outline done, you are ready to go for NaNo Bootcamp and NaNoWriMo. I will see you tomorrow for NaNo Bootcamp or, hopefully, I will just see you later on my channel for something else. All right, good luck with NaNo Bootcamp. I really mean that. Or NaNoWriMo, whether you’re participating in Bootcamp or not, or whatever month you happen to be watching this. I only do this because I love teaching. I don’t know if you guys know this. I love teaching. I’ve always taught. I’ve taught group exercise my whole life. I’ve been a university professor. I’ve taught certification courses. Thank God that I am alive now, when we have the online world and we have YouTube and everything else, because now I can teach tons of people.

Let me know if you have questions. No one’s really written in at this point. This is pre-recorded, so maybe people will write in later, as you guys get closer to the date, but I am super excited to see all of you in NaNo as a buddy, a writing buddy, and learn more about what you’re writing and learn about your books and everything else. All right, have a great month in November, and I will see you back here whenever I see you back here. Bye.

Get today’s Cheatsheet & the Scene Outline Template when you enroll in PREPtober: The FREE 31-day Outlining & Plotting Course to help you plot out your next novel.