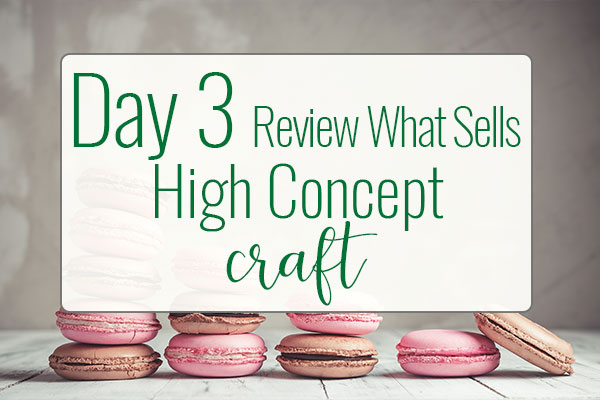 Today we’re defining What is High Concept and reading Lori Wilde’s book Got High Concept? Alright, don’t have time to read an entire book? I get it. Just make sure to download the High Concept Checklist.

Hi everyone. Welcome to day three of Preptober. Today, we’re going to be talking about high concept. We’re simply going to define what it is and in case you have never heard of it. Now, high concept really helps with the commercial viability of your book to make it more marketable. I would argue it simply just makes it more interesting for your readers and helps them to easily identify with you as an author or your book because maybe they’ve never heard of you and you’re a debut author. So, there’s a great book by Lori Wilde called Got High Concept. She does an excellent job of explaining it more thoroughly than I will today.

Her main point is high concept has five key elements. So, the first one is that it is different. It’s your unique selling position. This is a universal concept in marketing and product development everywhere. It is just something that sets you apart from everybody else. The second is that it is universal, and that simply means it is a shared sort of concept that everyone can understand like a cheating husband or a losing a baby. So, these are things that don’t require a lot of explanation. They’re simple. Everyone kind of gets it. It’s universal. The third part … and I do have to cheat and look … is that it has emotional appeal because if you don’t care … you hear this all the time.

If you don’t care about a character, you’re not going to keep reading the book. So, your high concept has to have some emotional appeal for people to want to pick it up and start turning the pages. The fourth thing is it should be visual so they can easily as soon as they hear your high concept, they can picture it in their mind. They don’t need a description that she has blonde hair, blue eyes. They can just picture the scene because it’s universal. The fifth thing is that it can be easily reduced to one sense. So, we’ll talk a little bit more about this tomorrow and with different tricks on how to do this.

High concept is something that can be boiled down to even a phrase. I don’t even know if it’s a total sentence. There’s a book by Jerry Cleaver called Immediate Fiction that I talked about in the outline. The whole point of that book is that every character has to have a goal, a conflict, and some emotional appeal or reason or feelings inside that particular scene. That is the same thing with high concept in that one promise should do three things. It should tell us who the protagonist is. It should tell us what they are after and what stands in their way. Hopefully, when doing that, it has some emotional appeal as well.

If your promise takes up more than one sentence in your high concept, then you don’t really have a high concept. So, again, it’s not theme. Feelings of loneliness or coming of age. It’s not a theme. High concept has those three different qualities as well as those five different elements. So, I will see you back here tomorrow for day four, where I will give you some tips and tricks on examples of where you can find high concept ideas to help get your high concept idea going. All right. Bye.