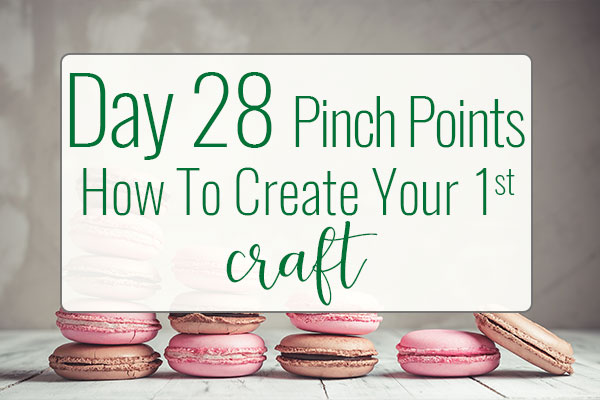 Hi everyone, and welcome to day 28, where we are talking about pinch point number one.

Pinch point number one typically occurs after plot point number one, but before the mid point, so it’s right there in act two to help bolster up what can be the beginning of a sagging middle, so it is a very much welcome plot device and story element that we want to add. It usually achieves two different things, and the first is, it could help strengthen your goal on why it is important for your character to achieve it, and second, it could further highlight the conflict and show us how dangerous or serious that particular conflict is.

Let’s take the example of the cozy mystery genre, and this could be achieved in one of three ways. One, we could put our main character in danger. Two, we could highlight that they are, in fact, a suspect, thereby strengthening the need for them to solve this mystery. Three, we could simply show that it’s not going to be an easy solve by further complicating the situation, so maybe it is an assassin, a professionally trained assassin that has committed this murder, and not just your regular Joe Shmo who might have left some sloppy clues around for your amateur sleuth to find.

Let’s take a real example. I have been obsessed lately with the Hallmark Mystery Channel, and when I say lately, it might be a couple years now, but I love that channel. There is a book by Charlaine Harris, actually a series, and it’s the Aurora Teagarden mystery series, and she’s a librarian who is an amateur sleuth. They’re a set of cozies, and so in the first book, Real Murders, which was made into a TV movie on Hallmark, she has found out that there’s a killer and she wants to solve the crime.

The pinch points are two. One, as she’s getting closer to solving and discovering who the murderer is, the killer actually tries to murder her with poisoned chocolate, so there’s one pinch point, thereby putting our character in danger. The second pinch point is there’s another murder, so now this isn’t just a regular run-of-the-mill murder, and if we solve it great, and if we don’t, whatever. This is a serial killer, and it highlights the importance of solving that goal, because if we do not solve this murder, there’s going to be a third, a fourth, a fifth, who knows how many, because it’s a serial killer.

I hope that was helpful, and obviously if you write cozy mysteries, that was very helpful, but the same thing can work in many genres. I will see you back here tomorrow, where we will start talking about pinch point number two. ‘Bye.