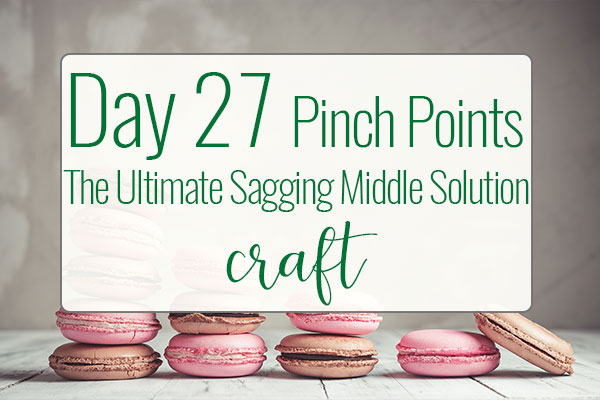 Hi everyone, and welcome to day 26, where we are talking about how to create your happily ever after. Now this is pretty easy. It’s a small part of your story. It typically occurs at the 99% mark, and sometimes people actually end with an epilogue. You see this a lot in epic fantasies, and also in other genres. Not just that. Or you use a method called mirroring, where the characters simply mirrors themselves from the beginning to the end. We talked about that before, as a before and after transformation.

Another way is for you to actually end with a twist. Now, this is something that Karen Wisener suggested in her book on writing the series fiction so that you have sort of maybe another open plot point, or a hook, maybe not your major plot point, but just a smaller one, so that people are enticed to come back and read book two.

In the Camilla Monk series, she has a amateur sleuth series about a girl, a woman, named Island, I think she’s in her twenties. But Island is a virgin, and she is in love with March, who is an assassin, and he is helping her. Now, they don’t have sex at the end of book one or two, three, four, five, or six, in case you’re wondering. And this is a similar plot device that was used by Janet Evanovich in the Stephanie Plum series, and they eventually had sex in I think book six or seven. But it took a while so that each book you kept reading to see who she was going to have sex with and if she was going to have sex. And for sure, this one, Island is still a virgin, and she’s probably gonna be a virgin for the whole series it sounds like until she’s 50.

But, that is sort of that twist where they sort of hint at it a lot, and you are wondering whether or not she is finally going to have sex with March in the next book.

I hope that was helpful, and don’t think too much about it. It is a tiny sliver of your book and you’ve done the majority of the work so far. I will see you back here tomorrow where we will start talking about pinch points. So, we’re going to go back in, I think sometimes they call it layering or snowflake method, and we’re going to layer a little bit more in on pinch points, and I think this is going to help with those sagging middle parts.