PREPtober Day 24: How to Resolve Your Impossible Black Moment 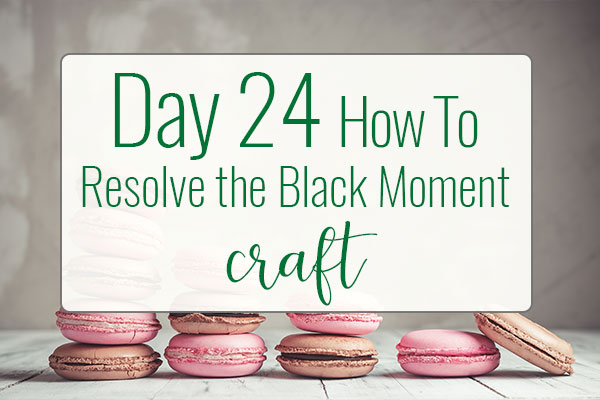 Today we’re going to review how to solve the Black Moment with a super list.

Hi everyone and welcome to day 24 where we are going to talk about how we create the black moment of resolution. Now yesterday we created the worst possible thing that could ever happen to your character, at least as far as this story is concerned and today we are going to solve that. Now typically that’s done through what’s called the climax and that’s the last showdown they have with the bad guy, the villain, the antagonist, whoever it is, they need to come out of the scene and they need to be triumphant.

Now an important part of this, and I’ve mentioned this already, is that external GMC that they conquer must be very visual so that the audience and the reader know that yes, they have won, they have done it, they have been victorious so that it is not left up to any ambiguity and this is going to create a much more satisfying ending for the reader than if they are wondering did that turn out okay? I don’t understand. Is everything alright? Do they still need to work on stuff?

Those are bad GMCs in general, so if you had done a great job in the beginning of setting this up for your story and your character, then we would be in a really great place right now and it’s going to be very easy to write that black moment of resolution. Let’s talk about the two types of black moment resolutions I think you could have. If you have a plot driven story, such as The Hunger Games, then typically the black moment resolution is that character pushing through the pain, that physical pain, or coming up with a new MacGyver-like solution.

In The Hunger Games Book One, she came up with the idea that the two of them should eat poisonous berries because that is something that the powers that be would never stand for. She came up with an innovative solution just with all of the information she had up until that point, and also with that last fight scene, so there’s a couple things there. In order to be the last two people standing, she pushed through the pain and she made it through, right? That’s what caused her resolution and had her as the last person standing.

If you have a character driven plot, say like in Legally Blonde, then the character has to overcome some sort of fear or pain or anxiety in order to conquer that external goal. With the movie Legally Blonde, she was uncertain, she was unsure of herself, everybody has lost faith and she was ready to give up and go home. She got a pep speech from someone that she shouldn’t give up and she should keep trying, and that is what caused her to go ahead and win that case.

Now that did come in the form of the professor. It was another female professor at the university that gave her a chat and told her she shouldn’t give up because she thought she was a little tougher than that and that again, is something that is not new information, it was already set up prior because she had met the professor in that first opening scene, and she was pretty tough herself.

Again, no new information should be introduced at this point and in fact, what you should do now as an exercise is do what Donald Maas says and that’s write down 20 different solutions to this black moment. Just know the first ten are going to be so obvious that they’re not going to very satisfying resolutions for your reader, so just go ahead and delete them and then the next 10, which required much more thought and energy because they didn’t come right off the top of your head will be something a little bit more clever and ingenious that your audience is going to like and is going to appreciate.

That is your homework for how to come up with your black moment resolution. Alright, I will see you tomorrow for day 25 where we get to talk about our happily ever after, also known as the aftermath of our character, so I will see you back then.