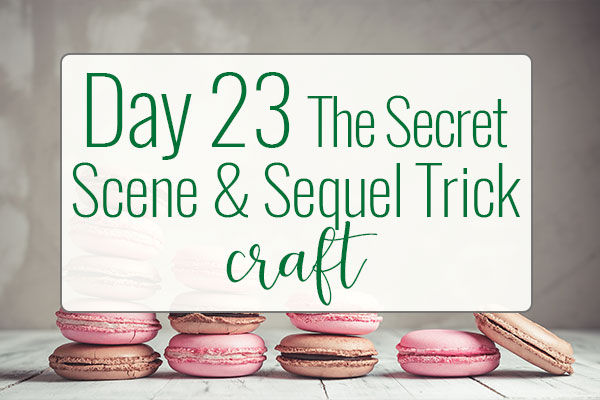 Today we’re going to go through the exact steps you need to Create Your Black Moment to ensure it is the blackest of black using the secret Scene & Sequel method.

Hi, everyone, and welcome to day 23, where we are going to create our black moment. So I’m going to give the exact steps of how to do that and what your black moment is made up of. I’m also going to give you a couple examples from the romance genre. All right, your black moment is made up of three parts: the scene, the sequel, and the climax. Now, the climax, I’m using that term synonymous with the black moment resolution, which we will go into much more depth in tomorrow. We already spoke about scene and sequel. Remember, it’s the event and the after effect. Those three pieces together make up your black moment. Now, how do you make sure you have a really black moment? I feel like this is pretty self-explanatory, but it should be an all is lost moment. There is absolutely no hope.

Typically, in films or TV shows, they will say, “You only have one shot at this. This is our only chance,” right? The clock is ticking down. You have to make it. You set your character up so that their failure is an epic failure. Not just a mini failure and, hey, you know what? No problem. We’ll switch to plan B. This is a failure of which there is no plan B. All the characters in this particular story, at this time, and the reader, should believe there is no possible alternate solution.

Now, the reason I split it out is because I you start thinking about your black moment resolution and how to solve this, then you will not make it that difficult, and you will try to give yourself an easy black moment, because you’re already thinking about the solution. That’s a problem for tomorrow you. Today you should just try to think about the best black moment that you can. Now, that black moment should be split into two parts. Remember when we originally created our characters, we had an internal GMC, and we had an external GMC. They should fail on both counts in this black moment so that they have nothing at all to fall back on.

Now, what movie do we want to use as an example? I say we use The Princess Bride, because hopefully everybody has seen it. I know it’s older, but this way, there’s no question about who’s who. The black moment in The Princess Bride is when she agrees to marry Prince Humperdinck in order to save Westley’s life, because they’re at a point now where they’re at the final showdown. This is the event. Westley is failing. He’s the only guy against an army of Prince Humperdinck’s men, so she agrees to marry him if he will let Westley go free. Westley is sad because she didn’t have faith in him and also because he lost the girl, and now the girl’s going to marry the villain. On top of it, of course, Prince Humperdinck lied, and he didn’t let Westley go free. He put him in the Pit of Despair, which eventually he will kill him. So all is lost at this moment. There’s no hope at all.

Now, the fallout from that is you can see that he’s in the Pit of Despair. He’s chatting with I guess the torture guy. They’re kind of joking back and forth on how hopeless this situation is. In the meantime, though, the black moment resolution is working itself, because he does have Inigo and Fezzik, and they are looking for him, but they have no clue where he’s at. This together is what makes up the black moment. Now, you have action, which was the scene where Westley lost. She agreed to marry Prince Humperdinck. He goes to the Pit of Despair. Then, you have the sequel, which is inaction. Pretty much, the character’s only reacting and not doing anything. So when you get back to the black moment resolution, you can see a definite change and the character being proactive and moving forward again. So it’s action, inaction, and then action.

The other film is a more modern one. It’s What’s Your Number with Anna Faris in it. It’s basically, I won’t go through the whole plot, but she is in love with her neighbor, and her neighbor is also a playboy. She doesn’t want a playboy. She wants to get married. She wants to settle down, so she wants somebody serious. She dumps him or rejects him, pushes him off. They’re not even on speaking terms at this point, at the black moment, because she’s putting all of her hopes and dreams and fears into her ex-boyfriend, who she thinks is the one that got away and the one that she’s truly a kindred spirit with and the person that she ultimately is going to get married to. But, of course, it doesn’t work out. She tells him something funny that she was able to tell her neighbor, who she really is in love with and he accepted her, but when she tells this new guy … Not the new guy, her ex-boyfriend, who she thinks is going to be her future, he scoffs at her. He looks down at her. He doesn’t want to be with her. He’s disgusted by her true self.

So now she’s embarrassed because she’s put her true self out there. She can’t trust to be herself around him. The external GMC is she’s not going to marry this man, because he’s not onboard with that. This is her all is lost moment. Then, you see her in the sequel reacting. She doesn’t know what to do. She’s feeling lost. She’s frustrated. She’s talking to her friends at the wedding that she brought him to, and that’s the sequel. The resolution for that is she actually finds strength on her own and runs out to go find her neighbor and be with him. That is, again, a problem that we will talk about tomorrow.

All right, go ahead and I would say just watch some of the films in your favorite genres. You could skip all the way to the end if you’ve seen them already. Just kind of jog your memory on what that is. Pretty much in all movies, it’s right about the 80% mark, so just do a little math. If it’s a 90% or two-hour movie, zip ahead and you can see that black moment. All right, I will see you tomorrow when we will solve our black moment. Bye.