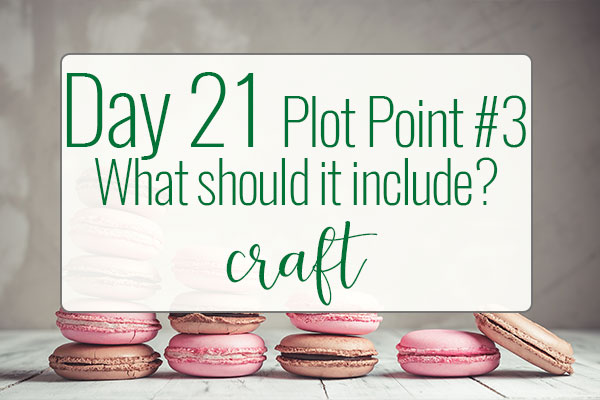 Today we’re going to review what Plot Point #3 is, how to write it and when it should occur. This is your last major plot point before the big Black Moment.

Hi everyone and welcome to day 21, which is our last and final major plot point, which is plot point #3. Now today, we are going to simply talk about where this occurs in the story and what it should include. So it occurs right about the 75 to 80% mark, it signifies the end of Act II and really just moves you right into Act III. And typically, that’s marked by what’s called a turning point, which is in our example of Titanic. That turning point was when Rose decided to jump off of the ship, or off of the lifeboat, not the ship, and back onto the sinking Titanic ship just so that she could be with Jack. Now the new information that was presented at this point is Cal has a gun and he’s actually trying to kill them and that ship is definitely 100% going down, there’s no doubt about it. So they end up going down into the ship even further, rather than staying above water so that they can escape Cal and the gun, which is obviously a much more immediate threat than the ship that is going to sink in a couple hours.

Now in the third plot point, this is the last opportunity you have to introduce any new information into your story. So what that means is, you cannot at any point after this, introduce new characters, new data, new ideas, new tools, a new fancy, I don’t know, machine gun that can solve all of your problems in this situation of what’s coming up next, which is your black moment. So sometimes what I will do is I will pencil something in very lightly about what I think my plot point #3 will be, but then I will come back and solidify that after I’ve written my black moment. Because in order to help solve my black moment, I might need to infuse some information that the character either needs to know or a person they should know so that the resolution of that black moment doesn’t seem miraculous or that the character didn’t work very hard for it because that is called Deus Ex Machina, which nobody wants, it is the worst type of ending ever. It simply means God from machine and that you have infused some sort of miracle to the story so that it was magical and the character didn’t actually have to work for it and that is not at all something your readers will find as a satisfying ending.

All right, I will see you guys back tomorrow when we will start talking about that black moment. Bye.