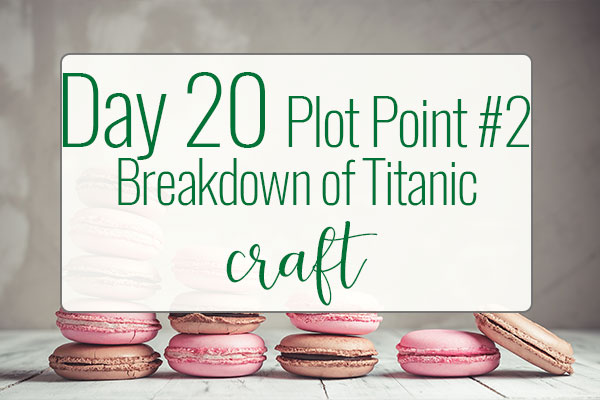 Today we’re going to review what Plot Point #2 is, how to write it and when it should occur.

Hi everyone, and welcome to day 20, where we are talking about plot point two. Now, plot point two is smack dab in the middle of act two, and we talked yesterday about how to avoid sagging middles, which is pretty much all of act two. So I have some other tips and tricks for you as well that I’ll show you after this, but first let’s talk a little bit more about what plot point two is.

Plot point two is the point at which your character has jumped in with both feet in. They’re fully committed to their goal, and it’s sometimes called the point of no return. So in the movie Titanic, when Jack discovers Rose about to jump off the side of the ship, and she’s going to commit suicide because she just can’t live like this any longer with Cal, that is plot point one. Now, when Jack and Rose have sex, that’s plot point two. Now they’re fully committed. So she’s all in and she’s going forward with Jack and this new life with him.

Now, let’s talk a little bit more about what you can do to avoid those sagging middles, and I know we talked a lot about different tools and tactics, but let me give you some books. So depending on what genre you write, and we talked about this a little before when we started talking about outlines in the beginning and what needed to be in your plot, and each genre has different rules. So I think this is a really good place for you to look up the specific rules for the genre that you’re writing, to help give you some fresh ideas of what can go into that act two and that middle part and things that you should be setting up.

If you are writing fantasy or sci-fi, this is Now Write, kind of works like a, I would almost say they’re kind of like blog posts. They have a lot of different exercises and they actually have homework at the end of each chapter to give you some ideas on what to do. There’s this book, Writing the Paranormal Novel, which is great if you write fantasy or paranormal. And it has a lot of specific things for that genre, as does this book by Scott Orson Card. Now, this book has the spiral binding much like, I think there’s a couple other books that, one by Donald Moss and another by, well, I can’t remember. But they’re pretty Spy Writer’s Digest, and pretty much any book that has a binder like that, I am going to buy, because I just love them. But this has in here a separate section what should be included if you are writing about witches versus werewolves versus vampires. So I think this is a really great reference novel.

If you are writing mysteries, I think I mentioned this before, but Hallie Ephron’s Writing and Selling Your Mystery Novel is excellent. It goes through all of the different pieces for that. Also there are two books, the Book of Poisons and the Forensics, and these are specifically for writers. And they go through how they can be used in your novel so that they’re both realistic and they also give you ideas on how you can work those into the plot and they give you examples of where they have been used before as plot devices. Now, same thing. This is a Now Write book that again reads just like blog posts with homework at the end of each. So it has excerpts and advice from different mystery writers.

Let’s say you write romance and there is, this is the Creative Writing Master Class, Teach Yourself. They have a series of books for different genres, and I don’t know that it has a ton of ideas, but I think it’s still a good reference. I do breeze through it when I am kind of stuck and need some ideas. The other thing is Writing New Adult Fiction, and this is great if you are writing that particular subgenre of romance, and it does have some other gems in here. I think my friend Elana wrote a chapter in here on audiobooks. So I just like this book because it does have things other than just for new adult. And of course, there is the other book on how to write romance that is taught. It goes in conjunction with another class that is taught through Gotham that I mentioned before.

Probably the best one is if you are planning to write a series, and I know they’re so popular right now, Karen Wiesner’s Writing the Fiction Series is really great, because it is going to tell you exactly what you should do for your series if you plan to write it as you are plotting, so that you make sure that your series has all of the correct elements in it so that you can write a two, three, four or however many books you would like to write.

All right, I hope that was helpful, and I will see you guys tomorrow, when we talk about plot point three. All right, bye.