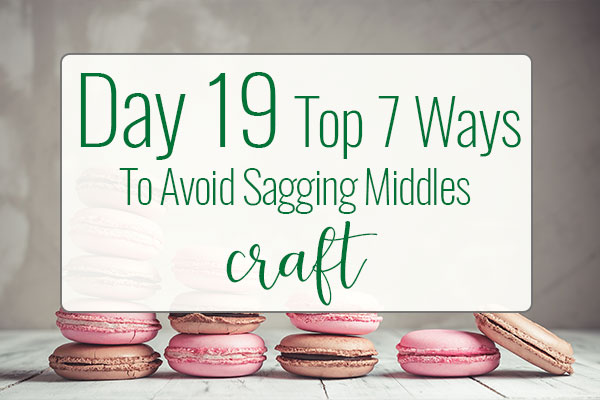 Today we’re going to review what causes Sagging Middles and how to avoid them while plotting and outlining.

First, do you have Boring Characters?

1 |  Does Their Inner Life Conflict w/Outer

There should be some sort of inner vault of secrets, desires beneath the surface and lies waiting to be discovered that keep your character out of balance with the face they show to the outside world.

Does life just sort of happen to them vs them happening to life? Does your character not really do anything?

4 |  Do You Have Non-Functional Characters

Does this character do nothing to move the plot forward and just there for comic relief or because you needed someone for your main character to confide in to share details?

Hi everyone, and welcome to day 19, where we are talking about sagging middles. And we specifically have this lesson today because this is usually when it starts happening after plot point one. Now up until now, we’ve had great characters, we’ve had a spark of an exciting incident. We’ve led up to a great plot point one, and then for whatever reason, it starts to get a little boring. So, let’s talk about why that happens, and how we can avoid that.

I have a set of seven questions that you can ask yourself to make sure that you do not have a sagging middle. And more importantly, I have split them out into different categories to help you to better analyze your story, and your plot, and your structure, and then attack those.

The second thing is are they too cliche’? And I think that’s pretty self explanatory. So, if you have someone in there for comic relief, or you have some drop dead gorgeous blonde in there, try to make them a little less I guess stock. So give them some other characteristics as well.

The third thing is are they too passive? So, is the story happening to them? Or are they going out and making things happen? So, your characters should be active, and that means they should be taking action, making decisions, doing things, meeting people, going places, right? Make sure your character is pursuing things versus waiting for things to happen to them.

And the last one is do you have some non-functional characters? And this happens a lot. When you need to convey some information, there is possibly a plot device that you are not sure how to make that happen. And you might bring in some non-essential characters just to fulfill that need. Now, if your character, whoever it is a main or supporting character does not help to move that plot forward, or force your character to face an obstacle that they do not want to, then you should definitely eliminate that character. Remember, we talked before, and more is not better. Less is more.

The other category is goals. Are your goals boring? And the best way to determine whether or not your characters have boring goals is to make sure your goals always accomplish one of four things. And all of these four things have one thing in common. First, I’ll tell you the four things.

Now, the last two items are obstacles. Do you have boring obstacles? So, the first question you should ask is did you delay your conflict too long? So, a lot of time, you come up with a great conflict, and GMC for a particular piece of the story, and you want to wait until later. Well, don’t wait. Just do it now, and just assume that you are going to have another great idea further along in the plot as we go on. So, don’t worry about making things not that conflicting or not really happening, or trying build up how great it is, and then waiting ’til later to show the conflict. Just go ahead and show it right away.

The second thing is are all of your conflicts exactly the same? So, in other words, does your character maybe run into rain, and this stops them from achieving their goals of getting across the great divide of, I don’t know, Australia or something. And then after that, after they’ve conquered the rain, do they then run into a hailstorm? And they have to conquer that? And although hail is worse than rain, it’s the same thing. It’s weather. And then after weather, does a hurricane come out or a tornado. And even though you’re escalating the weather, it’s still the exact same type of conflict. So, you’re better off just doing one category.

If you say I’ve done weather, you checked that off the box, and then move onto something else. Maybe it’s a person. Maybe someone is blackmailing them. Maybe they have lost their car. So, make sure it’s a different type of conflict, and that it also escalates, just like you did with the weather. So, it should do two things in order to not stay the same. It should be a different category and it should escalate.

Those are my top seven recommendations on how to avoid sagging middles at this point. Now once we get into Nano Bootcamp, we will talk a lot more about avoiding boring scenes and boring dialogue. But since we’re not actually writing yet, and we’re just doing the plotting and outlining, those are really the main areas that you want to focus on.

I hope that was great and helpful, despite the filming conditions that I have today because of the carpet cleaning. And I will see you all tomorrow, which is day 20, which is plot point two.

Get today’s Plot Point #1 Breakdown of Fifty Shades of Grey when you enroll in PREPtober: The FREE 31-day Outlining & Plotting Course to help you plot out your next novel.