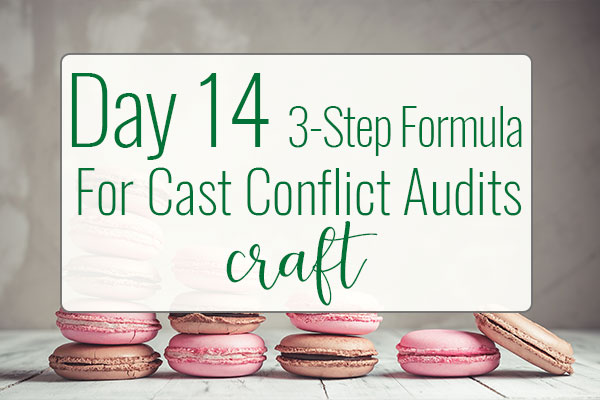 Today we’re going to talk about how to create the Ultimate Character Cast Matrix in order to Perform a Cast Conflict Audit for your novel.

Hey everyone. Welcome to day 14 where we are going to performing a Cast Conflict Audit. Now, in order to do a Cast Conflict Audit, you simply need to put together a matrix. It should be the list of every character on the left, on every character again on the right, so it repeats. Now everywhere that Joe and Joe meet up, you can just put an X. Obviously, the character isn’t going to be in conflict with themselves necessarily. That’s maybe their Internal GMC, which we’ve already discussed, but for each character meeting every other single character in the book, they must be in conflict one way or another.

In your diagram, where those two character sort of meet in that matrix, put down what handcuffs them together. Then in the second part, put down what their conflict is. Possibly it’s because they’re coworkers, they’re family members, because they’re attending an event. You don’t have to think too deeply about this, but there must be a reason why, with this inherent conflict, they can’t simply walk away, because we all know, that there are people that we meet every day that we dislike, and have some sort of conflict with. We simply just walk away. But when we meet people that aren’t strangers, and let’s say they’re coworkers, or they’re someone that we have to work with to put together a bridal shower for a friend, it becomes a source of angst, and anxiety, and stress, because we are stuck with that person, and we do have a conflict with them.

That’s what you want for your characters. You want them to be stuck with somebody that they have a conflict with. Every single person, just like every single word on your page, should not be wasted, and that’s why we do revision later, every single character in your book should not be a wasted character. Each character should serve a purpose. That purpose should be conflict. Even if it’s your main character’s sidekick, their best friend of the protagonist, it should have some sort of conflict. It’s not just a yes person. They’re bringing up new ideas that the protagonist didn’t think about. Or they’re bringing up bad ideas that lead the protagonist down the wrong road. Either way, everybody should have a role that plays some sort of conflict with another character.

All right, I hope that was helpful. I will see you guys next week when we talk all about plotting. Well actually, for the next two weeks we’re going to talk all about plotting. Then the last few days, right before we lead up to that, we’re going to talk about outlining our scenes, so we’re ready to go for NaNo. All right, I will see you guys tomorrow. Bye.