PREPtober Day 13 – How Inherent Conflict Writes Your Story For You 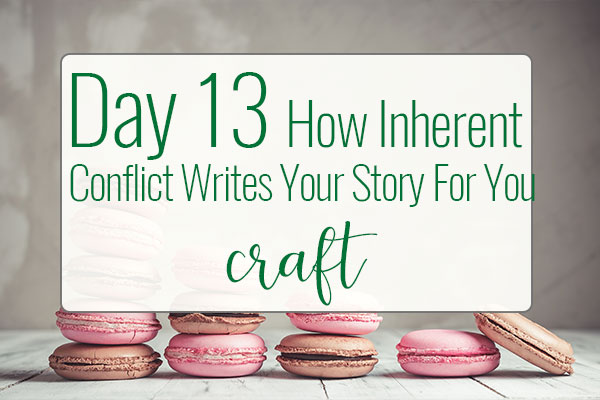 Today we’re going to talk about how to create Inherent Conflict throughout your novel.

Hi everyone. Welcome to day 13, where we are going to discuss inherent conflicts. Now, you only need two elements in order to ensure that you have inherent conflict throughout your whole story. The first element is something that we’ve already touched on. That’s simply that everybody should be handcuffed together in someway. Whether or not all of your characters are together for an event that they can’t get out of, they work together, or they’ve been assigned to something together, they cannot leave the situation. The second thing is they have conflict, right? So, it is simply inherent meaning that one person wants will negatively impact somebody else’s goal.

Or maybe they have the same goal like in Bridesmaids where Helen and Annie both wanted the same thing and only maybe one of them could have it. So, those are competing goals. When I think of good examples or more in depth ways to discover how to build inherent conflict, I immediately think of TV. There’s one book I want to recommend to you. It’s the TV Showrunner’s Roadmap. In here, particularly, chapter five and six, go through making us care about characters and then family dynamics. Not just family, like the example they use in here is the Simpsons, but family in the sense that you have, like we said, a work family, a volunteer family, a girlfriend family like in Sex and the City.

Either way, all of these characters are connected in a family sort of dynamic because they’re handcuffed together. They also bring up a really important concept in here. Whenever they bring on a guest star or a guest character that they write into the script, they make sure that that character has inherent conflict that is going to sustain an entire episode or even longer for an entire season or more to come. So, I think TV is an excellent example of how characters have been purposely placed together within a scene or within a story. All right. So, go through your cast of characters and make sure that everybody is interconnected and has inherent conflict with everybody else. I will see you back here tomorrow where will talk about how to audit that.