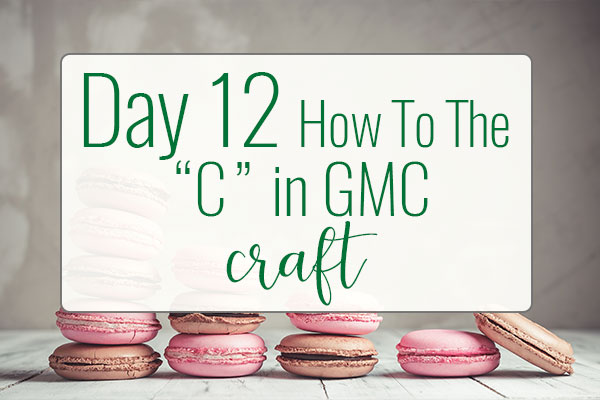 Today we’re going to lay the groundwork for further defining Conflict and how it helps to strengthen the “C” in GMC.

Hi, everyone. Welcome to day 12 where we are talking all about conflict. Now remember, conflict is the C part of GMC, the goal, motivation, conflict that we gave all of our main characters. We’re going to go just a little more in depth to make sure you have a really good conflict, because we’ve spend so much time talking about goal part of GMC, and not as much time on conflict.

Conflict is simply a clash of two elements, whether that is man versus man, man verus nature, man versus machine, right? There’s a lot of different combinations. When we talk about how to make sure you have a really good conflict, there’s one book that I would like to recommend, and that is Conflict and Suspense by James Scott Bell. Now, you can see I have a bookmark here because that goes to the acronym that he uses to make sure that you have a really good conflict, and that’s called LOCK.

I think if you can go through and make sure you meet all the criteria for LOCK, you have a pretty good conflict in place. Let’s just go through what that acronym means. It means a lead worth following is the L. We talked about this before. You want to have a really great protagonist who people are going to root for, they’re invested in. They understand what he wants, what his goal is, and they really get the why behind why he wants it. Because in our example, we said maybe it’s an altruistic reason or something else, but the point is you have a really great lead, and that also means a lead when we talk about the villain as well. He has to have a very compelling reason and not just because he woke up and wants to be evil, right? Everybody should have, whether or not it’s correct, a really great motivation that’s justifiable and rational to them in their mind. That’s a good lead worth following.

The second one is O, which is for objective. Now, James Scott Bell, and Michael Hague, a lot of people advise to get a goal or an objective that is as close to death as possible. You know, your fear, your motivation is that you don’t want to die. That could be physical death, like in a horror or a suspense novel or genre, or it could be a psychological death. In Bridesmaids, losing her friend would be one type of death, or her self-esteem, right? Those are certain types of death that she wants to avoid. Also, it could be professional death. I think there are two TV shows that do an excellent job, and that’s pretty much the entire focus, is Suits and also Scandal. Their whole point is that no one’s going to physically die, but everyone is very worried about their careers and the professional death of those careers.

The second part of LOCK is confrontation. We talked about this, or maybe we didn’t talk about this. But in romance novels, you have two opposing characters, the hero and the heroine. They’re eventually going to fall in love, because without a happily ever after it’s not a romance novel, but they have conflict. The easiest part of anybody you have conflict with in real life is simply to walk away, and the conflict is solved. However, what we do in romance novels is we handcuff them together so they can’t possibly walk away from each other, whether it’s because they work at the same location, or they are both in town for a wedding that they are participating in. Somehow, those those two people are handcuffed together despite all of the conflicts. It would be so easy to walk away, but we’ve made it such that there is a situation in which they cannot walk away. That’s the same thing that you want to do with all of the characters that have conflicts. You want to make it so it’s not easy for them simply to walk away, because that would be the obvious solution.

The last part is a knockout ending, right, for the K. That means a really emotionally satisfying ending where readers or viewers feel as if all of that time and energy was well invested in watching these characters. Typically, what makes a very satisfying ending are superhero movies where the hero has sacrificed something, where in order to have that satisfying happily ever after, they had to give up something of real value and importance to them to show how important, or how valuable, or how hard, well-earned that ending truly was. You made them work for it, right? Because we talked about making our characters want to suffer. That’s it today for conflict. I hope you found that useful. I will see back here tomorrow where we will talk about inherent conflict. Bye.