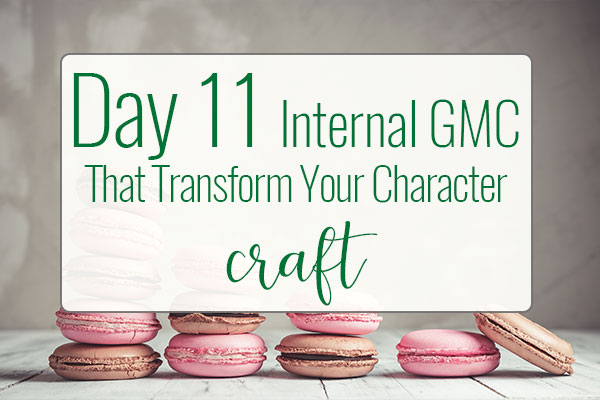 Today is all about creating our character’s Internal GMC – the feeling they aspire or hope to have.

Hi, everyone, and welcome to day 11, where we are going to discuss internal GMC. Now, internal GMC is how your character wants to feel, or hopes to feel, or aspires to feel, and when I think of internal GMC, I think life coaches are excellent at getting to this in real people in everyday life, because your internal GMC doesn’t always align with your external. They do a great job of figuring out what your true internal GMC is, what your fears are, what the conflict is, what the issue is, so that you can achieve the external GMC that you want, and at the same time, they also make sure that they’re aligned. Maybe your external goal is not really indicative or something that will truly bring about the state of the internal goal that you have inside of you, some burning, deep desire. Right? This does not have to be visual as much as just a state of being.

A good example is, let’s say your character wants to be free of her parents. She wants to feel independent. That’s her motivation, is because they keep stopping her from doing a lot of things in life and experiencing things and meeting new people, because they are so controlling, but the conflict is that your character’s deepest fear is, they’re actually afraid to be out on their own. So even though they say that, they keep going back to their parents and asking for advice, or going back and asking for money because something failed, or they can’t pay their rent, or they need their advice. This is the internal workings of your character.

Yesterday we talked about Bridesmaids, and my main star of the story was Annie. She, very much her external GMC was to be a good bridesmaid, but her internal GMC is to feel successful. We know this, because she already suffered humiliation from her bakery shop which went out of business, and so her fear is that this will happen again, and she has feelings of low self-confidence and being unsure of herself. That’s the fear that’s stopping her from really feeling successful, and that’s also possibly the fear that’s stopping her from really trying at the jewelry job that she had that she was fired from. That is the internal GMC for Bridesmaids, so go back to the story that you had for your book, or your movie, or the example that you were looking at for your genre, and try to do the same thing.

One, see if they’re even aligned. It’s possible they’re not aligned, so it’s your job right now to kind of play life coach to your character. Remember, you want them to suffer, and you want them to be uncomfortable, because that’s really what a story is. It’s the drama and the tension. Remember when we talked before about characters and I said not to waste time on demographics, because honestly, I think this is such a huge waste of time and also nothing that is going to be useful to help you later on. You really need to get at the true inside hopes, fears, challenges, aspirations, of your character, the things that they really dream about, and that’s going to help you to figure out what their internal GMC is, as well as what those conflicts of humiliation.

Think of, when we talked before about your character’s deep wounds, there does not need to be a million deep wounds, just one or two very defining things that are limiting them from really achieving their goals, or taking the next step, or having them retreat, like the example we said before with the girl who wanted independence from her parents. It should be something that has happened in their past. They’re afraid of it recurring, and they’re afraid of … When I say “recurring,” afraid of that feeling that will happen should it recur. If Annie, in my example, fails again, she’ll be publicly humiliated, and that’s her biggest fear, and she won’t have a good inner sense of self-worth, because she’ll feel like a failure again.

She just had one deep wound, and also, the other with her boyfriend leaving her, and that kind of related to, relates to her fearing that her friend may leave her, so again, just one to two deep wounds are really going to help move that story forward. It doesn’t matter what magazines Annie reads or what designer clothes she likes, so if we had spent all this time worrying about silly demographics like that, not only would it have been a waste because we couldn’t use it in our story, but it would also derail us from the real purpose of what we’re trying to show to our readers and possibly waste a lot of time, because you might try …

Because what happens is, the reason I said, “Don’t worry about demographics,” is, you’ve done all this work on demographics, and then you feel compelled to weave it into the story somehow, and now you’ve wasted time on the page with details that, one, don’t matter, and two, that may bore your reader and get them to leave your story before you get to the good part. Remember, just think about the psychology behind your character, because they’re going through a transformation, and those are the important parts of your story. I will see you back here tomorrow, when we will talk more about conflict. Bye.