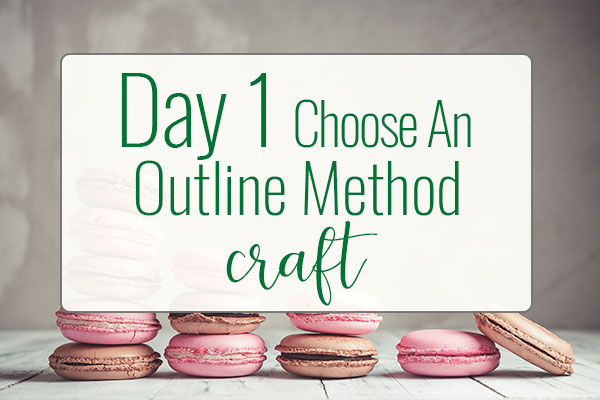 If you’re on Day 1 already, then we’re choosing our outlining method that we’ll be using for the month. Here are my top recommendations of things I loved and things I didn’t love. The download has even more recommendations than the ones you see in this video and are divided by genre.

Hi, everyone. I’m Lisa, and I want to help you with PREPtober, which is also known as the month where you outline and put all of your characters and details together so you can hit the ground running when November hits so you can finish NaNoWriMo. If you’re not familiar with what NaNoWriMo is, that is simply a collective group of people writing an entire novel in the month of November, and by entire novel, I mean 50,000 words. That breaks down to approximately 1,600 words per day. Now, everyone can join a writing group and have accountability partners. I will actually add my NaNoWriMo handle or whatever you call it down to the bottom so you can friend me on NaNoWriMo, and then we can track each other’s writing.

If you do not plot for October, it is highly unlikely you will finish NaNoWriMo. I have finished it twice, and twice, I have failed. The times that I failed were only because I tried to pants too much or I did too light of a job of outlining. So I would strongly emphasize outlining for the entire month of October. Don’t even think you might get a head start on writing. There are so many things to think through. Honestly, once you start writing, you’re going to forget. I forget. If you have really good notes to refer back to, it is going to make your writing so much quicker.

Let me talk about my favorite writing tools for outlining and ones that didn’t work so well that you may be considering. One I April Kihlstrom’s Book in a Week. It asks really great questions, but I would say it’s not as organized as I would like. What is your protagonist’s main goal? That is question number seven. What are the obstacles your protagonist faces in reaching his or her goals? These are great questions, but again, this is not for me, because I need something that’s very logical from point A to B. It has good questions, but the questions repeat themselves. That’s the questions for if you’re writing a science fiction book. There are questions, again, for romance, for murder mystery, for horror. When I say questions, each of those genres takes up about two pages. Again, not a bad book, but not your go-to outlining novel.

There is another book called Book in a Month, and this is really great if you’re just starting out. It’s not bad. I like that you can write in it, that it has plenty of space to answer all of the questions as you go, and it does a three-act structure, which is very popular and common inside of book and story outlines. Now, I like this when I first started out, but I found something even better. When I say I found something even better, what I found that I liked even better is Cathy Yardley’s Rock Your Plot. Now, this is my all-time favorite. It’s my number one. It’s my go-to. This is what I use to outline every single novel right now, and I love that she has short books on the subject. She has Rock Your Plot, Rock Your Revisions, all these different things. They are to the point, and they don’t waste a lot of time with just random stories or words. It just tells you what you need to know. Now, this follows a three major plot point structure. It has two minor plot points. It has a black moment and then a final ending. So I think if you have time for nothing else, I would definitely do Cathy Yardley’s system.

Now, there are other systems that I’ve been influenced by. I sometimes look at them, but again, this, to me, is the easiest system. Michael Hauge has an excellent system. If screenwriting is something that you plan to do or something that resonates more with you, you’ve heard that it’s really great, I’ve taken John Truby’s class, and that was good. Not bad, but again, there’s a ton of information. I don’t know if you have a lot of time to learn his system and do it for October, considering it’s the end of September right now. Michael Hauge also has an excellent system, and I’ve taken his class, as well. I actually really, really like his system, and it’s really sad. He had a great lecture series that was free on YouTube, but I’ve seen that he has since removed it. I think you can play for it at his site, but it’s totally worth it, every single penny.

He’s recently … I shouldn’t say recently, but I’ve seen that he’s partnered up with Chris Vogler, who wrote The Hero’s Journey, which if you are familiar with The Hero’s Journey, it is simply the process that, say, a saga goes on for maybe … Like Star War is a great example, what Luke Skywalker goes on. He goes on this hero quest. For me, The Hero’s Journey didn’t really resonate with me. There were parts in there that they were too far out there. To me, it’s a good system, but again, it didn’t work for how I like to plot. I would say the same thing about Blake Snyder’s Save The Cat. It’s a good system. I know people love it and swear by it. I’ve taken a course with an agent who loves and swears by it, but again, it just didn’t resonate with me. I think there’s 23 beats. There’s so many beats. It just was too much for me. It was a little overwhelming. Just logically, my brain doesn’t think like that.

The Plot Whisperer, same thing. Good system. I took her course. She actually partnered with an agent who asked really great questions. The Plot Whisperer just didn’t resonate with me, but if it resonates with you, she has a book and she has a workbook. I believe she also teaches a class in person in Northern California. Now, a really awesome, awesome agent is Donald Maass. If you’ve had the chance to take a class with him, you should. I would say you probably only need to take one class with him, because all of his lectures, I don’t want to say they’re the same, but if you’ve taken one, if you’ve read the books, you don’t need any more. He’s not trying to franchise a whole series on courses. These are two separate books. There’s the Breakout Novelist and then there’s Writing the Breakout Novel. This book I actually cut the spine off and spiral bound it, because I like to refer back to it and have it open while I’m reading, because it has so many great points. He uses a lot of good examples from other books where you just think, “Oh my god, that totally gets it. That’s exactly the right example for what he is trying to convey and something that I would love to do in my own writing.” I find these very inspirational.

He has some sheets that you can download from the site, and I believe they’re free. I actually haven’t downloaded these in a while. These go along with the Writing the Breakout Novel book, and these are workbook sheets. I single-side print these so that I can write my notes for my book as I go along. Now, these don’t follow, I wouldn’t say, a traditional outline, but I find these so valuable, and they make sense to me. So even though this isn’t written in an outline format, the process that he uses totally makes sense to me. It’s very logical, and I really, really like it.

Those are my top recommendations for outlines. The one thing I didn’t mention is I did take a class with one of Jerry Cleaver’s students, Mary Carter. She has a system that … Well, it’s Jerry’s system that he originally developed that went with this book. Now, I can condense this book down for you in one simple takeaway and that is every scene should have a goal, and obstacle, and an emotional conflict. That is the crux of this book. There are many other really great points to it, but if you learn nothing else from this book, that’s the one thing. When you’re writing, it always saves me when I have a scene and it kind of falls flat. That’s what your scene needs to do every single time in order to be a page turner. Mary teaches the classes in Chicago at the Chicago Writers Loft if you are there in person. She does not have online classes. So that is something that you could take, as well.

Another class I did take in person was the West Texas Writers’ Academy, and I’ve talked about that before as my top go-to conferences. Alex Sokoloff uses … Well, it’s her system. It’s a screenwriting system. It’s very similar to Cathy Yardley’s system, and she will help you plot out your whole book in that week. Now, that is in July, so it’s September now and you’ve probably missed the course, but you can still read her book. It’s a really great book, and she actually has a second version that is just for love stories. If you write romance, that is a great resource for you, and you can purchase it on Smashwords. The advantage of purchasing it on Smashwords vs Amazon is that you can then print it out, because you can purchase it as a PDF. If you’re like me and you like something like this and you like to refer back to certain sections, you can dog mark them. So this will be all marked up by the time we get closer to November. Then, that is going to be a really great option for you.I hope that helps you to at least start exploring and finding … I would definitely stick with one system. One. Don’t try to do many systems. Just breeze through all of these systems. See which resonates with you the most. You still have time before October starts. Then, I would commit to using just that system. Don’t try to use other systems. I do cheat, because I do kind of use two systems. I use Cathy’s system of the Rock Your Plot, and then I also use Donald Maass’s The Breakout Novelist to really help deepen each of those scenes and make them better. That is the method I use. I hope that was helpful, and I hope to see you in my NaNoWriMo group or my NaNoWriMo list of friends, and I will talk to you guys later. Bye.