How To Deal With Haters // Staying Positive // Authortube Collab 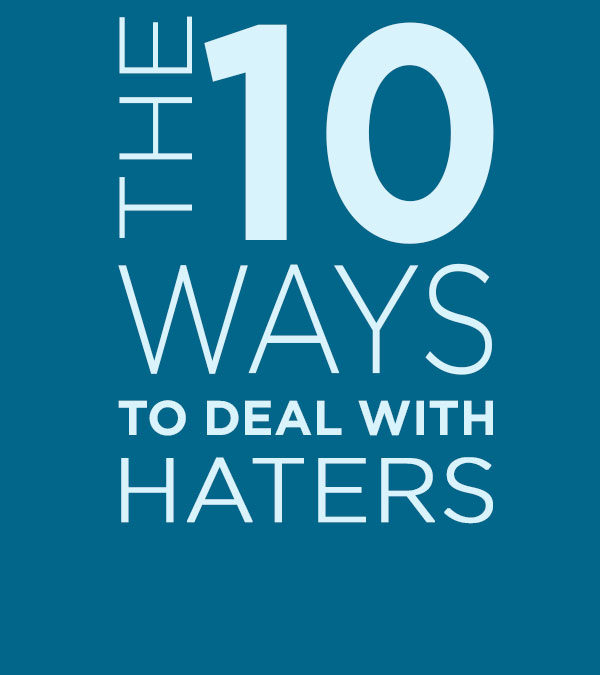 Today I’m teaming up with Meg LaTorre from iWriterly to help give you some tips on how to deal with negative comments, trolls, mean girl comments and all of that icky stuff. Whenever you put yourself out there, not just on YouTube, but anywhere you’re going to run into Watch Meg’s video at https://youtu.be/fg_-n_18DwQ Meg LaTorre is a writer of adult SFF, YouTuber, developmental book editor, writing coach, creator of the free query critique platform, Query Hack, and former literary agent with a background in magazine publishing, medical/technical writing, and journalism. On Meg’s YouTube channel, iWriterly, she geeks out on all things books—from the concept to the bookshelves (and everything in between). Meg also launched Query Hack, a query critique platform where writers can submit their manuscript queries or Twitter pitches for free feedback. She has written for publications such as Writer’s Digest and Savvy Authors on topics related to writing and publishing, participated as an editor in Twitter contests, including #RevPit (Revise and Resubmit) and Pitch to Publication, is a Resident Writing Coach at Writers Helping Writers, and can be found teaching online classes throughout the year. In her free time, she enjoys reading, competitive sports, long-distance races, running after her toddler, and sleeping. To learn more about Meg, visit her website, follow her on Twitter/Instagram/Facebook, sign up for her monthly newsletter, and subscribe to her YouTube channel, iWriterly. Website: http://bit.ly/iWriterlyWebsite Newsletter: http://bit.ly/iWriterlyNewsletter YouTube: http://bit.ly/iWriterlyYouTube Twitter: http://bit.ly/MegLaTorreTwitter Instagram: http://bit.ly/MegLaTorreInstagram Facebook: http://bit.ly/MegLaTorreFacebook Gary V had a great comment about this too at https://youtu.be/UQkLWg82BsM?t=1037 Kristen Martin shared some great words of wisdom on how to stop judging others if you’ve found that you’re on the other side of this https://youtu.be/UclJ9u6WYCg?t=1367

Hey, we’re going to talk about the top 10 ways to deal with haters. Now, anytime you put yourself out there, whether you are publishing a book, you are on Youtube as an author, cheaper a book, tuber or anything else, or on facebook or Instagram, you opened the door to a lot of amazing things like positive accolades, virtual high fives, being able to meet and collaborate with other people, but at the same time you may get some feedback or criticism that doesn’t sound so nice or maybe it could have been phrased a little differently or possibly just not set at all. So today I’m doing a collab with Meg LaTorre from iWriterly who is amazing and awesome, and you should go watch her channel just in general, but we’ve split up this list. So then I’m going to give you my top five tactics for dealing with haters. And then you’re going to switch over to channel and watch her top five.

Hi, I’m Lisa, a bestselling author of the Snow & Her Seven Seals series. And on this channel I talk about romance writing specifically for Newbie and aspiring romance authors. So if this sounds like you are something you might be interested in, make sure to hit the subscribe button below. I post new videos every Monday and today I’m doing a special episode on a Wednesday because I’m doing a collab with Meg now if you’ve never heard of mMeg, she used to be an agent. So the best thing about all the advice on her channel is she’s been really in the know and in the trenches and can give some real life publishing advice and perspective on her experiences and how that could best help you in your writing endeavors. So make sure to go watch meg’s channel. I’ll leave her link to her top five tips as well as her channel below.

The first one is two runaway, like I physically mean to exit yourself from that circle or that conversation or that venue or that event. It doesn’t matter what it is, you know, I used to sit there and just take it like I would try to be polite or I would maybe just not say a lot, but really be like very upset on the inside and now that I’m older, I realize that I’m not a tree. I don’t owe that person anything. So if you’re worried that you might look in polite, you’re not, that person is insulting you and they’re saying things that are very hurtful and whether or not they’re doing it in that sort of passive aggressive way where they’re pretending like they’re giving you a compliment, but they’re not really. Or they’re pretending like it’s, they’re not talking about you. If they say something that makes you feel bad, um, whether you know it doesn’t, it doesn’t even matter if not even going to give you examples.

You know what it is and you know how it feels. I want to give you permission to leave. You can. I’m not saying you have to be rude or make like a big deal about it. You can just say, I’m you know, excuse me, or I’m going to run to the bathroom, or I’m going to get a drink, or you know what? Actually I’m going to go home for the night. I’m kind of tired. It doesn’t matter. You don’t owe that person anything. You don’t owe them an excuse and you definitely don’t owe them your attention and time to be insulted, so you should just exit and go anywhere else. It doesn’t matter where you go or what you do, but you don’t need to stay there. The second thing is if it’s online you, same thing. You should extricate yourself. You can block that person and you can delete them.

So if it’s on youtube, you can stop people from making comments. I think I had some people that just came on to tell me that I was ugly or some comments and you won’t see them because I didn’t delete them or some comments like, um, your, your makeup looks terrible, or I hate your hair. Just nonsensical things and so I will just delete them and you can actually block that person for making comments. Facebook, you can block that person, um, you know, all of those different social media platforms. I would just look and see how you could delete someone or maybe you just get off that platform if it is maybe too upsetting or people just seem to be a ballooning on some particular topic that you wrote or something. Just leave the situation just like a physical situation and just extricate yourself. Um, the third one, and this really comes from my friend Lauren, is to burn it.

So uh, Lauren is a professional copywriter, but Lauren is, I’m so lucky to have lauren as a friend. She is amazing when it comes to sort of spiritual cleansing and you know, keeping a positive energy and she’s a very empathetic, a friend and just person in general. It’s really a shame. She shouldn’t really do spiritual coaching, but regardless I’m one of her practices is just a burden. Like if she has a negative comment that someone has said or something that sticks in her head, she’ll write it down on a piece of paper and then she’ll burn it. Like it’s going away. And you’ll see this a lot when people have done, I think it was called staging your house or cleansing your house and you know, if it has any sort of bad juju or energy from someone was there that was there that you can stage it, open a window and just kind of let everything go out on.

The fourth thing is to make lemonades. So if you go through some of the comments, especially if you’re going through your book reviews or if you are just looking at responses from people, not everybody is going to deliver critical feedback or criticism in the right format or delivery method. That’s why, you know, I used to do hr for years. We did tons and tons of training with managers on how to deliver year end reviews and how to spin things in a positive way. And you’d be surprised at how many people, even when they are well intentioned and they mean to say it in a positive way, it just ends up coming out all wrong. So, you know, just assuming giving people the benefit of the doubt and assuming that they are trying to express something that they would obviously wouldn’t take the time to tell you about it unless they really wanted you to change or maybe you know, they think that you could be better if you did blah blah blah, you know, just try to turn it or spin it into something positive.

Like, you know, I can’t even think of anything like I, I hate that this download digital download you gave me doesn’t have page numbers and you know, you might think to yourself, well it’s free. Why are you complaining? But maybe it would be better if you put page numbers in a table of contents. You know, that’s something in direction that people need that would kind of take your business to the next level. And you know, again, try to put a positive spin on something. So that is number four. Number five is empower yourself to take charge of the situation. And that goes back to number one. And, you know, being afraid to leave a negative situation or being afraid to appear rude or um, you know, just know that you can always, always do something different, right? You, you’re never stuck in that situation where let’s say you have a boss that’s just terrible at it makes you feel bad and he just insults you versus like trying to improve your work.

You can quit, you can transfer to a new department, you know, by saying that you are stuck. It’s almost like a self. Uh, and again, this comes from my friend Lauren. It’s a self limiting belief. And if you really believe that you were stuck and you put yourself in this victim mentality, then yeah, you probably are stuck. So, you know, be careful with the words that you say to yourself and the messages that you give to yourself. Like, this is never going to get any better. This totally sucks. You know, there are no jobs here. Like, then you’re never going to find a new job or a better situation or there are no men here to date, right? These are all self limiting beliefs. And if you think that you’re closing off yourself to the universe and all of the great positive possibilities that are out there, those are my top five.

So let’s recap. The first is to run away, like physically, just go away. The second is to block and delete if it is on line, the third is to burn it, just sage it away and clear out that negative energy. The fourth is to make lemonades and put a positive spin on it and see what you could learn. And the fifth is to empower yourself to take charge of that situation and open yourself up to the positive things in the universe. So all right, make sure to head over to Meg’s channel and watch her top five and also leave a comment below on any other great ideas that you have for dealing with these types of situations in case it is helpful to someone else. All right, I hope everyone is having a fabulous, fantastic and super positive day and I’ll see you guys next week.