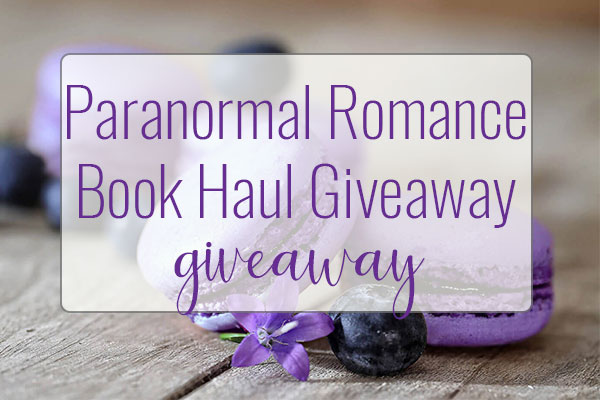 I’ll pick a lucky winner this Thursday. Are you an Author and want to participate in the Book Haul Giveaway? Sign up at https://theromanceroadmap.comand I’ll send you an alert for the next call for books!

Hi, everyone! I’m Lisa, and today I am doing a book haul on paranormal romances. I have five books that, I’m giving all of these away today to one lucky winner. So, two are from the Signet Eclipse line from Penguin, one is from Harlequin Mira, one is an Avon, and the last one is from Grand Central Publishing. To win these books, all you need to do is, one, subscribe to this channel, and two, make sure to leave a comment below with the name of your favorite paranormal book and the author.

If you like free books, and I suspect you do if you are still watching, then you want to stay subscribed to this channel because, for Vlogmas this year, I will be giving out two books every single day, if not more. It depends on how many authors I have participating, but I have enough books right now to give out two every single day of Vlogmas. I have paranormals, I have contemporary romance, I have more bad boys, I have more sweet romances, I have young adults, I have thrillers, I have Christian romances, and I have some mysteries, so all genre commercial fiction, fun reads, that are going to entertain and, hopefully, make you happy. They’re all romances. Everything has a happy ending.

Let’s go ahead and get started with today’s books. The first two books are both by Sylvia Day, and they’re in the same series. They’re the Renegade Angels series, and so the first one is A Touch of Crimson, and the second one is A Hunger So Wild. In A Touch of Crimson, we have an angel whose job I it is to hunt down fallen angels, and when fallen angels fall in this world, they become vampires, and they seem to be keeping lycans — werewolves — as pets, and there’s also a lycan uprising going on at the same time.

The angel that is in charge of this group that is hunting down the fallen angels is also in love with a human, and humans in this world get reincarnated, their souls get reincarnated, so he keeps falling in love with the same woman, and then she keeps dying because she’s mortal, and so, once again, he finds her in this lifetime, but she’s the daughter of a vampire that’s a fallen angel who he needs to punish, so that’s what this book is about.

The next book, A Hunger So Wild, is about a really oversexed lycan who is trying to barter and make peace with the vampires, and he’s the number one strongest lycan, and he’s trying to barter with the number two strongest vampire. I don’t know why she has to be number two and he gets to be number one, but she is listed as the number two strongest vampire, but unfortunately, she’s actually killed one of his friends, and so he has vowed vengeance, and it is his duty to avenge his friend’s death by killing her. So, he struggles with that because, obviously, he’s attracted to her because, I think I mentioned, these are all romances. This is really great because you get one and two in the series.

The next book is Heather Graham, and this is the Krewe of Hunters series, and that is Krewe with a K and an extra E at the end. This is a straight-up mystery. It is about a paranormal investigator who is investigating paranormal deaths in Arizona, and she is teamed up with the local sheriff to try to find out who’s behind all of these deaths. There is a movie theater here, or a live theater, I’m not really sure, and there is a skull that’s discovered among the props, but it’s an actual, real, human skull, and then, all of a sudden, more human parts start popping up in the desert, and so it’s up to them to trace this down and figure out what’s going on. Her special skill as an investigator is, when she touches things, she is able to see them in their prior life as they were every day, so that gives them some insight into what they’re looking for. So, if you like a mystery, and you like paranormal, this is a perfect combo.

The next book in the series is The Lady of Light by C. L. Wilson. This book is, if you love cheese, you’re going to love this book, and I like cheese. It is, basically, just all about female fantasies, and it’s the fey, and there are dragons, and there’s a bunch of other mystical creatures. This is number two in the, what’s it called, the Tairen Soul series, and you definitely do need to read number one. It is not one of those books where where you can pick up number two and figure out what’s happening. You will be completely lost as I was, so if you win this pack, you’ll want to buy book number one, which I bought electronically, so I don’t even have the physical book to give you, but it’s basically just, I think, two books that were cut in half because they were too long to put in one book, so this is the second half of that book. But, if you like fantasy and you like Lord of the Rings, you’re really going to like this book.

Last book is Stella Cameron’s Darkness Bred, and in this book, it is the second in the Whidbey Island series, so again a number two, but this one is a complete standalone. You do not have to read number one. You will not be confused. Now, on Whidbey Island, there are a ton of mystical creatures. There’s vampires, there’s werewolves, there’s fey. I don’t even know what else there was. There were a bunch of different things. But our heroine is a shape-shifter, and she’s being protected by a werewolf. Supposedly there are humans on this island, but you don’t really see a lot of them. There’s a ton of sexual tension that builds up, and they run into a lot of adventures on this island.

All right. That is it. Those are all five books in today’s giveaway, so make sure to comment below, and I will be announcing winners in a couple days. All right. Bye!