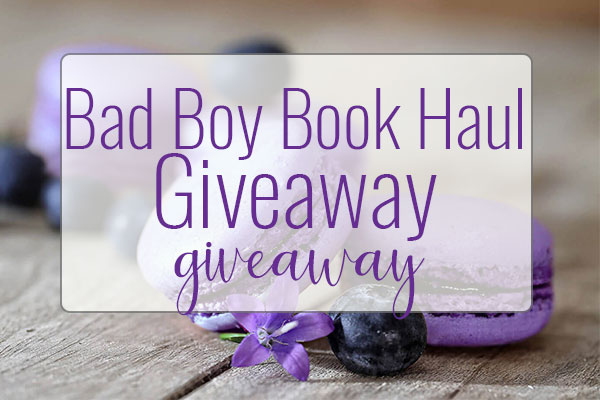 I have MORE Giveaways planned for the future:

I’ll be giving away 2 books EVERY DAY

Are you an Author and want to participate in the Book Haul Giveaway? Sign up at https://theromanceroadmap.com and I’ll send you an alert for the next call for books!

Hi, everyone. I’m Lisa and today, I have another book giveaway for you. I have five contemporary romances, all with a bad boy theme in them. Now, to win these books, you’re going to get all five if you’re the winner, all you have to do is one, subscribe to this channel, and two, comment below with the name of your favorite author. And yes, if you entered the last contest, you’re still eligible to win this one, as well. So, the deadline’s this Thursday, because that’s when the next video goes up. So, I’d like to announce the winner that morning.

I have for you, two Harlequins, two Avon’s, and one Penguin Signet Eclipse. The first one is The Downfall of a Good Girl by Kimberly Lang, which is number two in here series, The Leblanc Sisters, who are based out of New Orleans. Now, if you’re not familiar with the Harlequin Kiss line, it comes out for a month and it’s typically a new romance. However, this one, I think, is a rekindled romance, because Vivian who is a southern debutant living in New Orleans, runs into Connor from high school who is a rock star, and he’s back in town for the Sinners and Saints pageant. So, that’s a little different. It is signed by the author in the front, so that’s a big plus, as well. Now, you’ll notice the Kiss novels are much shorter, so it’s a faster read, and it was entertaining. I wouldn’t say it went too fast, I guess is what I’m saying.

The next one up is The Look of Love by Bella Andre, which is part of the Sullivan Series, so this is about one of the Sullivan Boys, and it is a Harlequin Mira, it’s been actually in digital, I believe, before it ever came out in print, but I really like print books, so that’s why I got it. Now, this one is not signed by the author, because the line for Bella Andre was so crazy long, I just didn’t have the time or the patience to sit through it, and there were other books and authors that I wanted to see, as well. This is a classic case of Chloe, who has sworn off men, and Chase who is a playboy photographer who’s not looking to settle down. So, it’s a fun read. It’s a full length romance.

The next two books are both by Rachel Gibson. They’re both from Avon and they’re both about guys who are hockey players. So, the first one is Any Man of Mine, which is about Autumn. Autumn is a single mom, which they didn’t put on the back cover, but you find it out in the first couple pages, anyway. And, she had a one night stand it sounds like, with Sam, who is the hockey player in Vegas, but they’re estranged, and he sounds kind of like a deadbeat dad, very disappointing. So, a couple years later, they actually get back together and Sam redeems himself. So, this is a story that’s really great for anyone who wants to rekindle with the father of their child.

If you loved Halmark’s Love on the Sidelines, then you’re definitely going to love Rachel Gibson’s Nothing But Trouble. It’s the exact same trope. The only difference is Hallmark has a football player and a fashion designer. And, Rachel has a hockey player and a struggling actress, but basically, the professional athletes have both been injured. They’re on the sidelines, on the bench, and their team managers have assigned them a personal assistant to help them get back on track. Neither of the football players or the hockey player want a personal assistant and the assistants have zero interest at all in their sports, and them as people. They simply need money. But, of course, they both end up having some sparks.

The last one is You’re the One by Robin Kaye and it’s part of her Red Hook Bad Boys series. So, she tells you right away that they’re all bad boys. And, Red Hook, if you’re not familiar with that is in Brooklyn, but our hero, Logan, is actually from Napa Valley, and he owns a vineyard, but he starts out engaged to somebody from Napa Valley, and he only is going home to help his dad who is getting older and is sick, as well as run his dad’s restaurant. And, that’s where he runs into our heroine, who is a super wealthy chef who owns a ton of restaurants, her family does, but she really wants to cook, but her family won’t let her, and that’s why she goes over to Logan to see if she can get a job, which conveniently, their chef just got fired or quit, I can’t remember. So, she ends up working for him.

He starts out the book engaged to another woman in Napa, but he doesn’t really love her. So, that sets it up so that he can get together with Sky, and he also may or may not have a daughter. There is a kid that’s kind of dropped off to him at the beginning of the book. And, for whatever reason, even 75% of the way into the book, he never bothers to get a DNA test. So, if you’re wondering, you’re not going to find out whether or not this is really his kid until the end. So, I won’t tell you, ’cause I won’t spoil it, but just know it’s going to be a while until you find out.

If you want to win these books, remember go ahead and subscribe to this channel, comment below with your favorite contemporary romance author, and I will see you guys on Thursday when I am going to announce winners. Alright, bye!