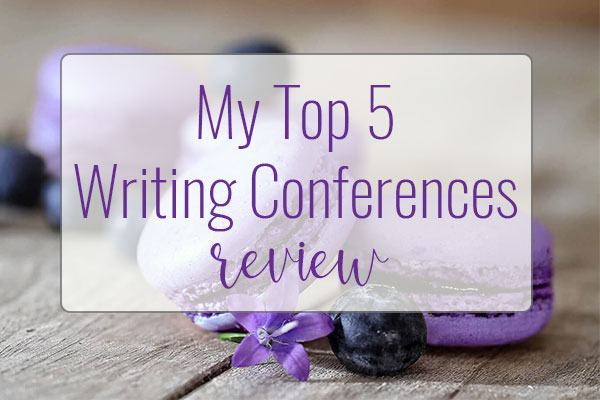 This video lists out my top 5 favorite conferences for writers to learn craft, become a better writer, move from aspiring author to published author and how to market your book. Reader Conventions and Booklover Conferences have been included in the 2018 Calendar Download but I didn’t include them in my video round up.

Here are my top 5 picks!

Here’s my top five picks for conferences if you are on a limited budget and the order, in which, I think you should prioritize, if you’re serious about writing. The first one is the Romance Writers of America Annual Conference. It is by far my favorite. It is in San Diego, this year, in July. It is mostly based on craft. They are pretty stringent in their acceptance and review of workshops. I’m actually presenting this year. I am teaching the Thursday morning Zumba class and the Friday morning Yogalites class. They have a nice panel of authors that do workshops. They make sure to have good facilitators, so you’re getting a lot of information.

2 | Second favorite conference is the RT Convention and that rotates to a new location every year. It is, I think, mostly for readers. They have a huge following of readers. I remember the RT Magazine, back in, I think the 1980s, that used to get mailed to your house, with different book reviews and told you about all the new romance titles coming out. If you’re a writer, the best part about it is the pre-conference. There’s two really good pre-conferences, if you’re a newbie writer, there is the bootcamp. That’s run by Stacey Kade and Linnea Sinclair and the pretty much give you everything and the kitchen sink. I don’t think they’re trying to hold anything back. They aren’t trying to sell you a future course, where they say, “Hey, here’s the basics, but if you sign up for our class we’ll tell you everything later.” They’re really just giving you everything that they can in that two day course. I actually, met two of my really good friends, Kristen and Jade, from that. If you have not heard of Jade Eby, I’ll leave a link below, she’s amazing, you should check out her and her books.

Cherry Adair does a plotting conference, where she’ll actually walk you through her method. She will sit down with each and every single person to make sure she makes it through their entire plot and helps them fix it. That’s a huge bonus. That, to me, is the most valuable part of RT and also all the social aspects. Don’t expect a lot of craft. The workshops that are related to craft are mostly just panels. The panels … there’s like a lot of panels. It’s really great if you have a question if you want answered, but don’t go to the RT workshops expecting someone to walk you through some powerpoint slides and actually give you a lesson, per se. It’s more Q&A and there’s a ton of free books. You should definitely take and extra suitcase to RT just so you have room for the books to bring back, because the shipping there is pretty expensive and you’ve got boxed for the shipping, I mean, it’s kinda silly, just bring an extra suitcase. Pay whatever extra it is to fly that back with you, or even a duffle bag. That’s going to help a lot.

3 | Number three on the list actually isn’t a conference. It’s more of a workshop, but it’s an opportunity to meet other writers. It’s Margie Lawson’s Immersion Program. It’s really amazing. I did the immersion program. She has it all over the place and she does it in different locations, depending if she’s at a conference she’ll try to do a pre session and a post session, so people can tack it on. I went to Colorado and did it at the one where she hosted at her house. It’s great. She makes amazing food. Her husband makes a lot of the meals. It’s a really great opportunity to bond with the other women there. I met three of my really good friends there, too. Most of the conferences you’re going to meet really great writers, who are in the same spot at you, and it’s a great way to form a support network. Jane and I both love writing and working out. Another person that I met there was Tiffany, who actually took me to the number four conference, which I’ll talk about in a minute. Becca who does a lot of … same thing like Jade … she write tons of different genres and she also provides services for authors, so I’ll leave her information below as well.

Again, it’s always good to get an author services or BA sort of help from somebody is already another romance author, because they know exactly what you’re going through. They already have a really good network established and they pretty much know all of the resources and who’s good who’s not good. I know a lot of times people say check out Predators and Editors, but you … sometimes people just don’t want to say, because they don’t want to say anything bad, but if you know somebody, and you’re working directly with them they’re going to steer you in the right direction.

4 | Number four on the list you may have never heard of, because I have never heard of them until I met Tiffany at Margie Lawson’s Immersion Program. That is the West Texas Writers’ Academy. It’s affiliated with the university. The campus is good in the summer. It’s actually starting up in two weeks from today. You still have a chance to sign up. They have a really geared programing. Find somebody who’s an alumni, both the alumni and the new person signing up, as long as they register together, get a discount. That, obviously, encourages more people to join. They do a really, really great job of hosting. Someone actually picked me up from the airport and drove me to their house. I forgot to mention, from Margie’s, someone picked me up … Margie picked us all up from the airport and drove us to her house.

They have bunch of different sessions, one week, goes Monday through Friday. You just pick one writing track. When I was there I did Alex Sokoloff’s program where she just went through plotting. At the end of the week, the best part about it, you had an entire book plotted out, from beginning to end. Alex, who has a background as a screen writer, had actually told you what was working and what wasn’t working and helped brainstorm … well the whole room helped brainstorm different solutions for you. It’s really great. I don’t know how … there were a ton of people in there … but Alex made it through everybody by the end of the week.

5 | Number five on the list is not a romance writing conference at all. It is Thrillerfest. That is in New York, every single year, in the summer. It is not too late to sign up; however, the pricing for Thrillerfest works, such that, if you sign up way, way ahead of time, it’s almost half the price of what it is right now. If you were to register now, I believe, it’s double what the original price was if you had registered earlier. It’s a huge conference. There’s tons of people. You’re going to get a lot of free books, just like you do at RT and RWA, not as many books, but they do have a lot of books for sale. All of the big name thriller writers are there. Anybody who’s anyone is going to be there and, quite honestly, if you’re a girl, and you’re single, you’re probably going to find more men, because all of these other conferences I’ve mentioned are all women. There’s nothing wrong with that, but, you know, if you were looking to talk somebody or meet somebody else of the other gender, this would be a good place to do it.

The best part about this conference is it’s broken up into a few different types of conferences in there. It’s a little confusing. The first one that I did that I thought was by far the best was what they call Master Craft. Master Craft is an entire day, from eight to five, with just one single person. These people do it for free. They’re not even paid. They’re just doing to help out Thrillerfest and the Association of International Thriller Writers. They’re just giving up their time and teaching, basically, how they write and things that they’ll motivate you. When I was there, I took a class with Grant Blackwood. Grant Blackwood was amazing. If you are ever, ever looking for motivation, Grant Blackwood is the guy to go for. He doesn’t actually teach any courses, so I think they only time you can find him is at Thrillerfest.

I also took a Master Craft class with Steven James. I really just loved his books. I read all of them. I was really excited that he was teaching a class. Steven James is a really great instructor, but again, if you can’t go to Master Craft, because it is quite expensive and it is in New York city, you could buy one of his books. He actually does a really good job of covering everything in the book that he did in the course. Again, it was nice to see him in person and also, while you’re there you do get an opportunity to submit a, I believe it was a ten page writing sample, and he critiques it as well.

Those are my top recommendations for writing conferences. I really hope you can make it to, at least, one this year or next. I know, I always love going to them. Energizes me, motivates me, and it’s always nice to catch up with your friends. This is what it looks like when the sun is setting in San Diego and your window faces out to the west.